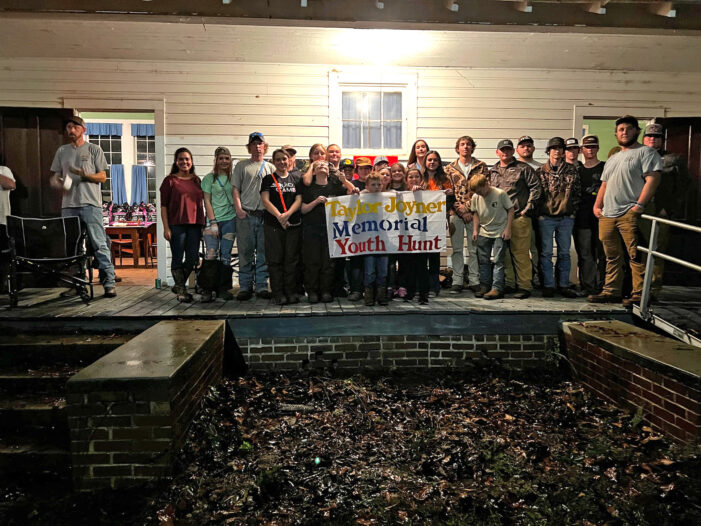 Pictured are members of The Youth Hunt, now Re-named for one of their late members

​The Red Hill Houndsmen Hunt Club held their annual Youth Hunt, Saturday, Nov. 5, 2022.  This year’s hunt was particularly special as it honored a former youth hunter who died in 2013, Taylor Joyner.  The hunt will hence forth be known as the Taylor Joyner Memorial Youth Hunt.

​Taylor began hunting at Red Hill’s youth hunts when he was just seven years old.  He continued to do so until he aged out at seventeen.  A year later, on Oct. 26, 2013, Taylor took his own life.

​The Advertiser spoke with Vonne Yonce, best friend of Taylor and member of Red Hill Houndsmen.  Yonce, who was not told of the decision to rename the hunt beforehand, expressed how truly moved and grateful she was that the club chose to honor and remember Taylor in such a way.  She noted that the goal of the youth hunts is to teach sportsmanship and that Taylor embodied that characteristic.  “If everyone was a good sportsman,” Yonce said, “maybe Taylor wouldn’t have felt alone and then done what he did.”

​Yonce also noted that these youth hunts represent more than one night in these hunters’ lives and teach life-long goals.  She stated that this honor paid to Taylor shows youth hunters that what they are learning now and the impact they are havingon those around them does not go away.  Taylor lived 2 ½ hours away from Edgefield yet attended the hunts held by the Houndsmen every year he was eligible.  Yonce said that the fact that the small club would remember him nearly 10 years after his death really makes a statement.

​Taylor’s life clearly made a statement as well.  He, no doubt, would be just as proud as Yonce of the overall winner of the Sportsmanship Award at this year’s hunt.  That hunter gave up his point lead to rescue the hunting dogs as they were headed toward a roadway.

​This reporter had the great pleasure of knowing Taylor and his grandfather and of watching Taylor grow to near adulthood.  He was truly a wonderful young man – thoughtful, kind, gentle, and loving – all the good things you wish for your child to be.  It was heartbreaking to learn of his death and still brings tears to this day when I remember him.  I would like to take this opportunity to urge anyone who is contemplating taking their own life to reach out for help.  One area of support is the National Suicide hotline which can be reached by dialing 988.

​As for this year’s hunt, in the Junior Division, Khloe Archer won both the Overall Sportsmanship Award and earned First Place with her dog, Parvo.  Second place winner in the Junior Division was Emerson Grumbles hunting Diesel.  In the Senior Division, Jayden Smoak took home the Overall Sportsmanship Award hunting Snap.  First Place Hunt Winner was Macy Paul with her dog Lilly.  Second place winner in this division went to Jayden Smoak and Snap and third place was earned by Wade Frye hunting Cuzz.