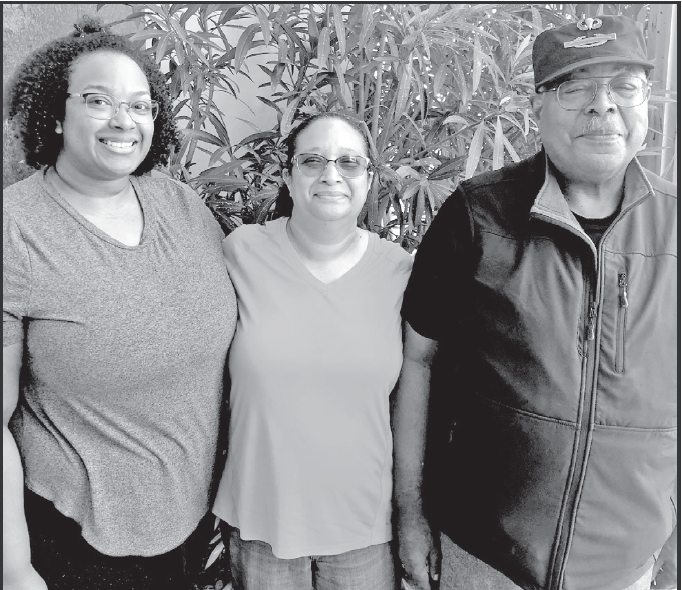 Apostle Caractor (far right) and his wife (center) and daughter (left) who will be participating with him as team members in the Crusade
of December 10, 2020.

Bethany House of Prayer will be the site of a Healing Crusade – called an “Encounter with Christ” by the organization that is bringing its leadership of ministers to this area from their headquarters in New York City.

Apostle William B. Caractor of “Discovered Being Ministry” is from this area, having grown up in Johnston. His wife, Rev. Helen Caractor, and daughter, Rev. Samantha Caractor, will accompany him in this endeavor. Others who are a part of the team (and were featured in their advertisement in the Nov. 30 edition of the Advertiser) are: Bishop Billy Smith of Building the Kingdom Ministries of Ridge Spring; Evangelist Fela Babb of Feed Fela Fund in Charlotte, N.C.; and Rev. Patricia Redd of Pleasant Ridge AME Zion Church, Gastonia, N.C., complete the team.

Apostle Caractor gave us a brief interview on Monday morning to give insight into his personal involvement in the work he does, also establishing his early life here in Edgefield County.  Author of five books available, he looked back on his education that started in this County.

Born in Manhattan, N.Y., int 1948 to the late Estee Mims, he was legally adopted by his grandmother of the Bland Baptist community of Johnston where he was raised. His education started at a school next to Bland Baptist Church, his grandmother a teacher in the system under Supt. Yarborough; then to Johnston Primary under Principal Chapelle; then to Edgefield County Colored School (now W. E. Parker) until 1964, when he returned to N.Y. to graduate in 1965 from Freeport High School. He was drafted from Edgefield County (as he remembered by Mr. Hungerpiller who was in charge of the draft at that time), and went through training at Fort Jackson, Ft. Gordon, and Fort Benning (Paratrooper training) and served in Viet Nam with the 173rd Airborne Brigade.  He was wounded and received a Purple Heart, a bronze and silver star for bravery, and nominated for the Congressional Medal of Honor. He returned to the U.S. in 1968, honorably discharged in 1969.

Caractor continued his studies at Hoffstra on the GI Bill, to receive a BS and MS, when he received a Calling and was ordained as an Elder in the AME church. His religious studies continued at Allen Univ. in Columba, S.C. where he eventually received a Doctor of Divinity from Dickerson Theological Seminary.  He worked for Amos and Sons in Johnston during this time as a licensed embalmer (from Atlanta institution), married a local women and had three children (two daughters and a son) who remain in the South trained in special services to their communities. Caractor explains that this first marriage ended in divorce as he was suffering from PTSD.

Ordained as an AME pastor, he served in Florida before returning to the First AME District in Jamaica, New York, where he felt the emergence of new spiritual developments that lead to the Prophetic and to Healing; this was following his own healing from a rare disease. From there he developed the outreach program in which he now performs as a minister: Discovered Being Ministry, a 501c in NYC and in S.C.  There are 28 churches which his ministry serves through a biblical teaching of “Healing in the Body of Christ,” as he explains. The outreach of his ministry goes to Schools, Courts and Prisons.  The team he has chosen for this event are persons he says who have had a healing experience from illness. Caractor brought his ministry to Bettis Academy in 2021 and later to Boston, Massachusetts.

Helen and William Caractor’s son Elijah will be a part of the team as a videographer.  He is in training at Fort Gordon, Augusta GA.

Apostle Caractor Brings a Healing Crusade Has Roots in Johnston/Bland Baptist Area added by admin on December 9, 2022
View all posts by admin →