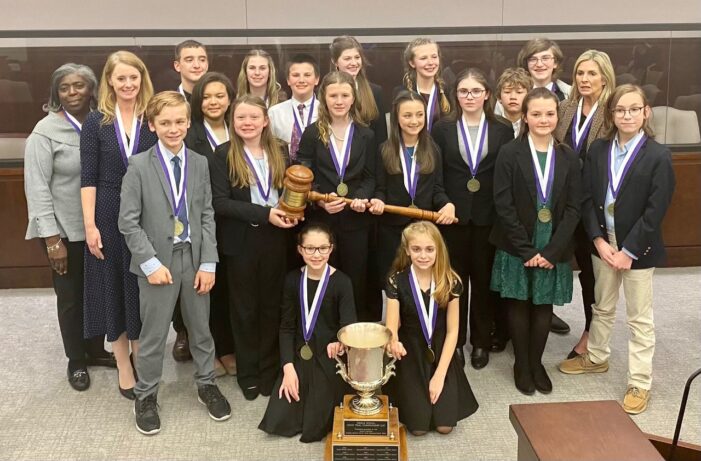 Edgefield County Superintendent Dr. Kevin O’Gorman pointed to the high level of skill present in each individual team member as a primary reason for the collective success of the Eagles in Columbia.

“I was very impressed by the overall level of competition,” commented Dr. O’Gorman. “This is one of the few opportunities for middle school students to compete at the state level and they were able to bring the championship back to Edgefield County. The entire team, and especially the six team attorneys, presented a very balanced group across the board in the competition and that type of depth was one of the reasons I feel they were able to win.”

The previous two state competitions were held virtually due to the pandemic, so winning the state championship in person was an unforgettable experience for eighth-grader Dixie Latham, one of the team’s six attorneys.

“This is probably the best thing I’ve ever been a part of winning,” stated Dixie. “All of my friends were sobbing when we made it to the finals and then we won and nobody expected it. We only had a little time between the third round and the finals and it was the most stressful thing ever because it’s all on you at that point, but I was very happy.”

Eleven teams competed at the state mock trial competition, which is sponsored annually by the South Carolina Bar Association. Two rounds ofcompetition were held Friday (Dec. 2) with a third round Saturday morning (Dec. 3) that determined the remaining two teams. In the championship rounds, the two remaining teams presented their cases for the prosecution and the defense to decide the mock trial champion.

Seventh-grader Liam Smith’s top moment was actually making the finals as one of the last two teams competing for the title. Saturday marked the first time the Eagles had advanced to the championship rounds of the state competition.

“This means a lot because we worked so hard to achieve it,” commented Liam. “It was really suspenseful at first and then exciting because we still had to compete again.”

Law enforcement officers with the Edgefield County Sheriff’s Office welcomed the Eagles home in Johnston at the county line with lights flashing prior to the team’s celebration meal Saturday evening at Mario’s Pizzeria in Edgefield.

“The whole team really came together,” added Bledsoe. “We’re losing some great kids to the high school team at Strom Thurmond High School next year, but we also have some wonderful kids who are returning and I’ve seen a lot of promise in some of our sixth graders who were witnesses this year.”

Sixth-grader Olivia Stevens is one of those up-and-coming standouts. While she is thrilled the Eagles were able to win the championship this yearshe’s already looking forward to competing again next year.

“This is my first year and it was really stressful, but I worked hard and it means a lot to win the state championship and I am so proud of this team,” Olivia stated. “I cannot wait until next year. It was really fun and I was really sad it ended.”

Dr. O’Gorman says he is extremely proud of how the Eagles represented themselves, their families, JET Middle School and the Edgefield County School District.

“The students face real challenges in having to think critically on their feet after a witness may not respond in a way they expected, and they’re doing all of that in front of the judges and a lot of adults in the room,” stated Dr. O’Gorman. “For middle school students to perform so well in front of all the adults and have the ability to modify their strategy right there in the moment, it shows me, academically, our middle school students are right there with any school in the state.”