DISPUTE AT THE MET 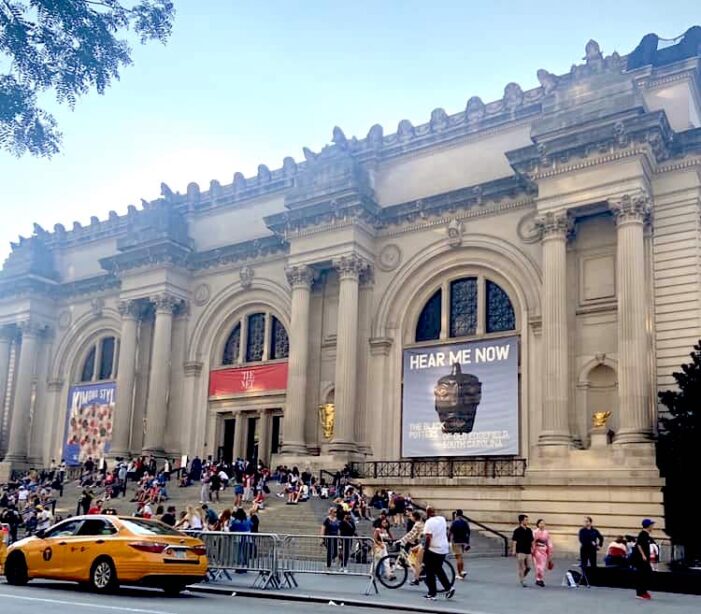 A Summary by Leonard Todd

“Hear Me Now: The Black Potters of Old Edgefield, South Carolina,” the very welcome new show at the Metropolitan Museum of Art, contains a disturbing error. I and the nine other men and women whose names appear at the end of this summary are drawing attention to it here in order to keep it from becoming an accepted part of the historicalrecord.

​Each of us listed below has long been connected to the story of Edgefield Pottery. We have focused scholarly research on it, we have written books about it, we havecreated archives to help others in their search for answers to the lingering mysteries that surround it. When we heard of plans for the exhibition, we welcomed the fact that a trio of young curators had been put in charge:  Adrienne Spinozzi, Associate Curator of American Decorative Arts, The American Wing, The Met; Ethan Lasser, John Moors Cabot Chair, Art of the Americas, Museum of Fine Arts, Boston;and Jason R. Young, Associate Professor of History, University of Michigan.

​Though Edgefield Pottery was produced successfully throughout much of the 19th century, the part played in it byDavid Drake, the now world-famous potter at the center of the show, only began to be known in 1930. It was then thatLaura Bragg, Director of the Charleston Museum, and a small research team made a trip to the Edgefield area. Her museum had been given an enormous pot signed with the name “Dave,” and she wanted to find out everything she could about this unknown man. When she arrived, Carey Dickson, a Black potter who had worked in the industry throughout his long life, came forward. “Of course I knew Dave,’ he said. “I know all about him. He used to belong to old man Drake and it was at that time that he had his leg cut off. They say he got drunk and layed on the railroad track.”

​These revelations about Dave Drake—that he had been enslaved, that he had only one leg, and that his missing leg had been severed in a railway accident—were added to the historical record by Miss Bragg and her team. The information was reported in the July 22, 1930, edition of The Charleston Evening Post and, generations later, in deeply researched books by Jill Koverman, Steve Ferrell, myself, and others.

​However, on June 17, 2021, just weeks before the Met show opened, an article by Jori Finkel appeared in The New York Times. It was entitled, “The Enslaved Artist Whose Pottery Was an Act of Resistance.” It contained a surprise:Jason Young, one of the three Met curators, was quoted as finding Carey Dickson’s account unreliable. “What we do know about slavery and disability,” he said, “is that there were large numbers of enslaved Africans who found themselves disabled either through dangerous work regimes they were living under or because it was a popular form of punishment to take a foot or leg in response to some infraction.”

​This was the first time I had ever heard of anyone, anywhere, suggesting that David Drake’s leg might havebeen amputated as a means of punishment.

​My wife and I flew in from Los Angeles, where we had lived since leaving Edgefield, to attend the September 19, 2022, opening of “Hear Me Now.” The three curators were welcoming. It was a wonderful gathering of many of the people I had known when I was writing about David Drake. His enormous ceramic pots looked very much at home in the vast spaces of the museum, as did the even more mysterious Edgefield face vessels that were createdduring the same period and were also highlighted in the exhibition.

​But, I was stunned to find that the same suggestion of amputation that I had read in the Times was part of the show. It appeared in the audio guide to the exhibit and again in the large, elegant volume that documented it. This now made three times that the strong suggestion had been put forth that Dave’s leg was not lost in a railway accident but had been cruelly severed in order to punish him.

​If this reconfiguration of Dave’s life were based on new evidence about what happened that long-ago night in Edgefield, I would have accepted it, certainly. So far,however, the curators had offered nothing of the kind to support it.

​I was eager for a dialog, but was I really in a position to challenge them? I had a family connection to the storythat might suggest bias on my part from the beginning: the man whom the curators were blaming for cutting off Dave’s leg was Reuben Drake, my great-great grandmother’s firstcousin. My connection to the people around Dave, though distant, had been a help to me when I was writing his biography, allowing me to find mention of him in papers that had been passed down through my family. But, here, I could see that challenging this new theory on my own might be interpreted as an effort to protect my ancestors from the judgment of history—and perhaps to protect myself, as well.

​I needed others to speak out with me. As soon as I returned to Los Angeles, I began to call people in South Carolina who had researched David Drake or his historic period. I formed a panel of ten scholars. Together, we wrote the curators requesting evidence for their assertion. They answered promptly, politely, in a lengthy letter, but it quickly became apparent that they had only conjecture to offer.

​The curators’ argument was this: major limb amputations were known to have sometimes been inflictedas punishment on other slaves in other Southern locations, so therefore they believed that such amputation had likelyoccurred in Dave’s case. And, because other former slaves in other locations had been known to sometimes hide the truth from researchers out of fear of retribution from their former owners, the curators believed that Carey Dickson likely had been hiding the truth from Laura Bragg.

​That was their case, which visitors to the show are now reading and hearing and passing along. It soon will moveonto the Internet and go everywhere. Without one piece of evidence having to do with Dave or his owner or his townor even the railroad, the life story of one of the great Black artists of the 19th Century will have been dramatically altered.

​Our panel of ten has written the curators to point out the seriousness of their error in disregarding the testimony of Carey Dickson. We have reported that there is no known evidence that anyone in the area has ever been subjected to major limb amputation in punishment for an offense. We have said how surprising it would be for Dave, after freedom came, to take the family name of the man who had deprived him of his leg. No matter what logical argument we have put forward to the curators, they have had a ready dismissal for it: “Slavery was not a rational system.”

​Still, in their reply to us, the curators offered an accommodation. In spite of the reasons they had given to discredit the testimony of Carey Dickson, they said, “To be clear, the foregoing should not be taken as evidence that Dickson’s account was wrong. It simply means that the account has to be considered in view of the context under which it was created.” And later: “We acknowledge further that Dickson’s account of [the train] incident may very well be a complete and accurate reporting of the events in question.” ​But, they did not abandon their position. “The undersigned,” they wrote, speaking of our panel, “may well argue that the account of Dave losing a leg due to a train accident holds up to historical and scholarly examination. We simply beg to differ.”

​We responded with two local newspaper articles from the period during which Dave lost his leg: one told of public drunkenness, the problem which led to Dave’s accident, among Edgefieldians of both races; the other described a Black man being run over by a train and, still conscious and talking, being carried off to medical help. The County Coroner told us that such accidents, from which the victims often recover, have a long history in the area. These were pieces of local evidence that showed how very plausibleCarey Dickson’s story was.

​Indeed, local evidence was what was missing from the curators’ argument. We asked them to attach the followingnotice to each mention of their amputation theory: “An independent panel of scholars has examined this theory and found it to be without local evidence of any kind.”

​But, the curators were done. A brief note formally thanked us for our interest and made clear that the discussion was over.

​ Our panel now had to choose the most effective means remaining to us to prevent this new and unfounded theory from becoming a permanent part of David Drake’s story.

​After discussing a variety of options, we have chosen to ask The Edgefield Advertiser to publish in its paper edition this summary of our exchange with the curators.Thanks to Suzanne Derrick, editor of the Advertiser, the story is available in this issue. It also can be found on the website of the newspaper at www.edgefieldadvertiser.com.We will also be depositing paper copies of the summary in the Archives of Edgefield and other key repositories across South Carolina.

​We, the undersigned, are doing our best to keep David Drake’s story as close to the truth as it is possible to know the truth. We will continue to do so.

​Harris Bailey, Jr., Co-Author of the award-winning book “Our Ancestors, Our Stories”

​Bernice A. Bennett, Genealogist; Radio Host of “Research at the National Archives”

This Summary will also be available in the online edition of the Advertiser (January 11) and on its websitewww.edgefieldadvertiser.com (January 12).