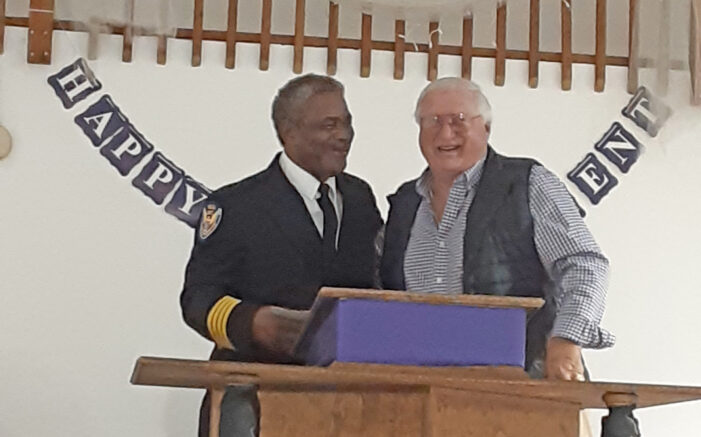 ​A celebration to mark the retirement of Chief Albert “Deke” Tanks was held Saturday, December 31, 2022, at the Dream Center in Trenton, SC.  Filled with people coming to pay their respects to the retiring chief, the Dream Center was festively dressed with balloons, banners, and tables with different pictures of Tanks displayed in the flower arrangements.  A wide array of finger foods was served to the hundreds who came to honor and celebrate the long-serving chief.

​A formal recognition time was held at 2:00 during which Mayor Billy Padgett gave an emotional speech praising Tanks and noting their longstanding friendship and working relationship.  He spoke of Tanks’ service to the town and of how it went well beyond being a law enforcement officer.  Padgett presented a picture reminiscent of Mayberry’s Andy Griffith and gave examples of how Tanks went above and beyond his duty.  One of those examples was of how Tanks would often pick up groceries and deliver them for a certain resident of the town.  Town Administrator Roger LeDuc and Town Clerk Sandra Grandy also spoke to honor Tanks.  Grandy humorously told of their early years sharing a small space together and of how, if she wanted privacy, she would turn her little space heater up which was a sure way to get the chief to leave.  LeDuc told of his decade of working with Tanks and he echoed both Padgett and Grandy when he said there had been no arguments during their times of service with the chief.  All said that even if they did not see eye-to-eye on a subject, there were never any harsh words or hurt feelings.

​As a token of appreciation for his service, Grandy presented to Chief Tanks a shadow box containing one of his work shirts and other memorabilia.  LeDuc and Padgett then presented to Tanks a heavy wooden box on which was a plaque commemorating Tanks’ service to the town and inside of which was Tanks’ service weapon and badge.  To mark Tanks’ official end of duty, a Final Call-out was given by dispatch.  The Call-out signaled the last time Tanks would sign off from duty and also noted his time and service to Trenton and to Edgefield County as a whole.

​The day ended with a long line of well-wishes having their pictures taken with the retiring chief.

​As a lifelong resident of Trenton, Tanks will no doubt be a continued fixture in the town.  The Advertiser wishes Chief Tanks a long, happy, and well-deserved retirement. Tiffani Ireland

Retiring Trenton Chief of Police Tanks and Mayor Padgett added by admin on January 10, 2023
View all posts by admin →