Death of a Policeman: Birth of a Baby – Author Dorn Brings Ghent to Edgefield 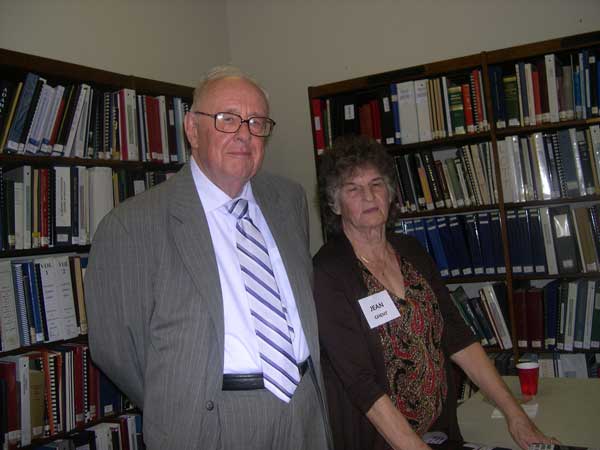 Author Felder Dorn brought the subject of his recent book, Death of a Policeman: Birth of a Baby, to town on October 1.  She is Jean Ghent, the daughter (baby at the time of the real story) born to a female S.C. Penitentiary inmate of long ago, at the same time of Sue Logue’s incarceration, the Edgefield woman who was electrocuted following a trial of great notoriety here.

Dorn is known best among Edgefieldians for his book on the Timmerman-Logue murders of the early 40s that catapulted Edgefield into the limelight for many years.  His book, Guns of Meeting Street, is rich in its study of the case with the precipitate benefit of experiencing the language and mores of that time in Edgefield history.

Mrs. Ghent was accompanied by her three daughters, Mary Bruce and Betty Shoemaker of Salisbury, N. C., and Glenda McCombe of Linnwood, N. C. A number of citizens were on hand at the Tompkins Library/Welcome Center to meet them and to purchase the book. This new book of Dorn’s is for sale at the Tompkins Library.

Laura Wells, granddaughter of the murdered policeman in the book Death of a Policeman by Felder Dorn responded to our wish to hear from her.  She had emailed us a correction on her grandfather’s name and we sought her response which she willingly gave.  We thank her.

Good morning. Thank you for making the edit to my grandfather’s name. I would be glad to speak with you briefly (we anticipate an interview) if you would like to . . . If you haven’t read the book yet, it reflects more of the story of Jean Ghent, baby of Beatrice and Clyde….which is certainly an interesting and sad story.  I do not begrudge Mrs. Ghent, nor does my family because we know she was also an innocent victim in this tragedy and suffered much due to it.  Having said that, my father is the only living child of Elliott P. Harris and he, along with his 3 siblings, had to be raised without a father due to the careless, selfless, impulsive actions of Beatrice Snipes. The real heroes of this story are my grandmother (Elliott’s wife) Eula Harris and Eula’s mother (my great-grandmother).  They were the ones left behind to pick up all the pieces and had to face the endless news coverage and politicization of this terrible tragedy.  Together, they were able to raise 4 lovely children and did an exceptional job.  I can only imagine the desperation they must have felt given this happened during the Great Depression.  I was fortunate enough to have a wonderful relationship with my grandmother and great-grandmother and they were quite outstanding people that I looked up to.  My great-grandmother, who we called “Nanue,” lived to be 101 years old, so she was definitely a strong individual.  My dad, Gettys Harris, is one of the kindest, sweetest people I know and that is a testament to his mother and grandmother.

Thank you and take care,

One Response to "Death of a Policeman: Birth of a Baby – Author Dorn Brings Ghent to Edgefield"