By Edgefield Advertiser on April 1, 2013Comments Off on Piper Tales – Chapter 30 – Message From an Angel 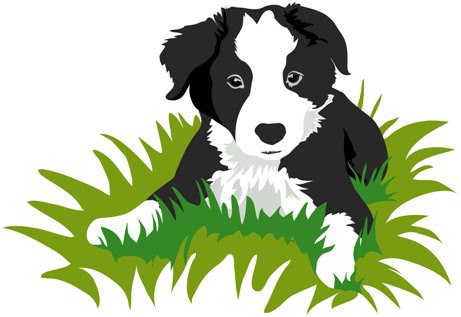 The Continuing Adventures of a Very Lucky Black and White Dog –

Last week a state-wide ring of dog thieves were reported being active in the Sandy Clay area and, as Whitville Academy’s spring break began, Bill wondered if there was something he and Piper could do to help catch them.

Chapter 30 – Message From An Angel

White trumpets bobbed above the purple bow and shiny green foil decorating the pot of Easter Lilies Sheriff Allen cradled in his arms as he climbed the steps of the front porch. Rhett heard the doorbell ring and slid into the hallway just in time to see Sheriff Allen greet his grandmother with a kiss and hear him say, “Happy Easter, Coretta.”  Her face filled with joy as she looked up into his warm brown eyes and said, “Happy Easter to you, Tommy.”

Rhett announced his presence with a forced, fake cough which Sheriff Allen acknowledged by tossing a bag of Jelly Belly jelly beans to him saying, “And Happy Easter to you too Rhett.’  Rhett caught the beans mid-air.  “Thanks, Sheriff.  Don’t I get a kiss too?”  “Alright now, Rhett”; said his grandmother, “that’s quite enough out of you! Put your jacket on and let’s go. If we don’t leave now we’ll never get a seat in church.”

Coretta was right. Mount Zion Church was filled to overflowing on Easter morning!  People tucked into pews like candies in a box as ushers hurried to place chairs in every possible space. Thankful joy and praise filled the air for the merciful, loving pardon of man’s sin that separated him from God through the life, death and resurrection of His only Son, Jesus. The choir swayed and sang, “He’s alive and I’m forgiven, heaven’s gates are open wide!!” Soon everyone joined the Resurrection Celebration, singing, swaying and clapping their hands. It was indeed, a joyful noise!

A hush softly began to fall throughout the congregation as Pastor Campbell stood and took his place in the pulpit.  He opened the Bible and began to read from the book of Matthew:

“After the Sabbath, as the first light of the new week dawned, Mary Magdalene and the other Mary came to keep vigil at the tomb. Suddenly the earth reeled and rocked under their feet as God’s angel came down from heaven, came right up to where they were standing. He rolled back the stone and then sat on it. Shafts of lightning blazed from him. His garments shimmered snow-white. The guards at the tomb were scared to death. They were so frightened, they couldn’t move.  The angel spoke to the women: ‘There is nothing to fear here. I know you’re looking for Jesus, the One they nailed to the cross. He is not here. He was raised, just as he said. Come and look at the place where he was placed. Now, get on your way quickly and tell his disciples, He is risen from the dead. He is going on ahead of you to Galilee. You will see him there. That’s the message.”

The women, deep in wonder and full of joy, lost no time in leaving the tomb. They ran to tell the disciples. Then Jesus met them, stopping them in their tracks. “Good morning!” He said. They fell to their knees, embraced His feet, and worshiped him. Jesus said, “You’re holding on to me for dear life! Don’t be frightened like that. Go tell my brothers that they are to go to Galilee, and that I’ll meet them there.” (Matthew 28:1-10 The Message)

Pastor Campbell held the Bible high and said, “This is the Word of God for the people of God.”  And all God’s children said, “Thanks be to God” and sat down to hear what Pastor Campbell had to say next.  (To be continued…)

Piper Tales runs each week in the print edition of The Edgefield Advertiser. Subscribe today so you don’t miss a single chapter.