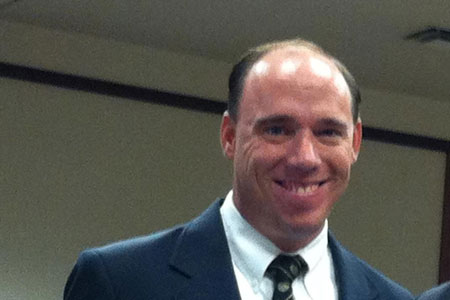 COLUMBIA, S.C.  — Johnston Edgefield Trenton Middle School teacher Joseph Friar has been named the 2013 Middle School Teacher of the Year by the S.C. Bar Law Related Education (LRE) Division. The award will be presented to Mr. Friar at his school’s annual awards day on June 3.

Mr. Friar was selected for the LRE Middle School Teacher of the Year Award because of his ability to communicate a deep respect for the law to his students. Mr. Friar started a Middle School Mock Trial program at Johnston Edgefield Trenton Middle School in 2010 to expose students to opportunities for careers in the field of law, and his teams consistently excel at the regional competitions.

Mr. Friar instills a sense of maturity in his students, which is continually recognized by the judges; his teams are known for their good attitudes, courteousness and good sportsmanship. Because of his passion for the Mock Trial program, Mr. Friar’s students develop a deep respect for the law, our system of government and the importance of our courts system.

“Being chosen LRE Middle School Teacher of the Year is an honor and is a major accomplishment not only for me, but for the students and school as well,” said Friar. “I am grateful to LRE for this award, as well the JET faculty, staff, administrators, parents and students for their support of the Mock Trial team. This experience has brought excitement and passion to the students, and I look forward to continuing to coach the JET Mock Trial team.”

The LRE Middle School Teacher of the Year Award was created to honor a S.C. teacher who best exemplifies the LRE commitment to help students better understand their roles as democratic citizens. It is presented to a teacher who has fostered public understanding of the values of the legal and judicial systems, stimulated a deeper sense of individual responsibility in students, encouraged and supported LRE programs; and increased communication among students, fellow educators and those working in the legal system.

The S.C. Bar LRE Division, which was developed to improve the ability of teachers to instruct law related education, has been part of the Bar since 1976.

One Response to "Joseph Friar Named Middle School Teacher of the Year by S.C. Bar"