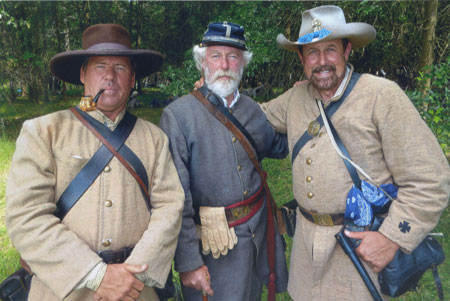 Two from Edgefield County participated in the much-written-about and much-talked-about reenactment of the Civil War Battle at Gettysburg which took place over a 3-day period, the weekend of June 27-30. Rob Keck and his son-in-law Curtis Wright were among those who came together with10,000, in all, representing both sides of the action in that memorable battle.

There are many superlatives given now to the battle – such as bloodiest, created the worst death stench (the smells continued for months and months according to one professor of history) – all sad and evoking the violence that the Confederate and Union Soldiers met with in this encounter. Not being a Civil War aficionada, this writer does not call on personal knowledge but has learned this information only recently – that it was a turning point in the War, one such example being that England began to pull away from sympathy and help for the South, seeing that the South was losing.

A brief interview with Keck (we featured a photo and comment from Wright in last week’s paper) brought some immediacy to the event that happened over 600 miles from here, in Gettysburg, Pennsylvania.

Keck showed us photos that were so authentic that they evoked emotions relevant to what families must have felt in hearing of the first battle. Rob told us that they were a part of the Palmetto Regiment, and that to be a part of the event, one had to appear in authentic gear.  Some of the clothes he already had – such as his hat and boots – but he called on a passionate Confederate re-enactor, David Satcher, who loaned him his uniform for the event. (Curtis borrowed his from Kenny Brown.) In preparation for the battle, participants were to draw cards which gave them directions as to how they would fight, if they were to be wounded or killed, and at what point in the battle they would meet their demise. A photo accompanying this story shows the cards that Rob Keck pulled.

Both Keck and Wright were “killed” in the battle; Keck was killed at the wall (seen in the photo) and Wright was wounded before the wall, then he was one of two who made it across, only to die on the other side. Rob Keck noted that they were doing battle in wheat fields and peach orchards.

What is most notable is that Keck participated in the re-enactment of Gettysburg in 1963, the centennial of the Civil War.  Here he was, fifty years later, once again re-enacting the battle.  (He met many men there who had been re-enactors of the battle over the years, but none did he meet who had been there fifty years before.) His first time was with his father; Keck was only 12 years.  His father, a World War II veteran, banded together with his fellow VFW members and joined in the Southern forces.  They of course lived in Pennsylvania (south central), the Kecks’ home state, but the VFW group decided to fight for the South.

During these three days in June, Rob stated that he would call home each night, to his elderly parents, and give them the details of the action.

When asked what prompted the re-enactors’ “return to battle,” Keck noted his family involvement and the opportunity to be a part of the 150th.  Curtis’ great-great-great-grandfather fought at Petersburg.  The group at large had letters, photos, stories of family members who had been a part of the original battle or were somehow strong in the War itself. “It was a way to honor those men.”

One Response to "Two Local “Confederates” Join in at Gettysburg"