By Edgefield Advertiser on August 4, 20132 Comments 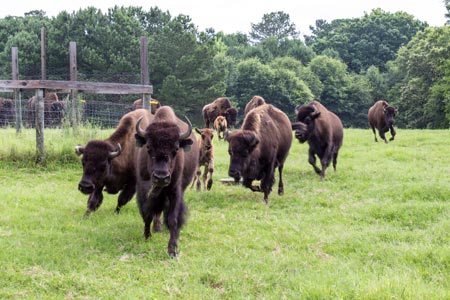 It’s not every day you see buffalo grazing in the South, but Edgefield County residents have that opportunity just five minutes outside the town of Johnston.

Sometimes you have to follow a dream, and that’s just what Barry and Debbie Mauldin on McCreight Road in Johnston did when in 2009 they purchased six female yearlings. “It was my husband’s dream to have a few bison, and at first I just wanted to support him and help him to realize his dream,” says Debbie. Four years later Lone Palm Bison Company is thriving and supports a herd of 36 and Debbie is as enamored of the buffalo as her husband.  When in the early stages of acquiring their bison, someone told them “You don’t decide on buffalo, they decide on you.” Buffalo are herding animals and seldom stray far from the herd. Although seemingly docile, a buffalo will show its agitation by pawing the ground and raising its tail, and will act with aggression when provoked and can run at speeds up to 40mph. The buffalo has a shaggy, long, dark brown winter coat and a lighter weight, lighter brown summer coat with typical weights of 1000 pounds for females and 2000 pounds for males.  The heads and forequarters are massive, and both sexes have short, curved horns that can grow up to 2 feet long, which they use in fighting for status within the herd and for defense. For the first few months of life, calves are lighter in color, sporting reddish brown coats.

The Lone Palm Bison Company, like all bison ranchers, is committed to raising their animals naturally. Naturally-raised bison interact with the environment as Mother Nature intended. Their movement across the land promotes healthy ecosystems, and produces a delicious, nutrient-dense meat. The U.S. Department of Agriculture regulations do not allow bison to be raised using growth hormones.

According to the National Bison Association, bison meat is lower in fat and cholesterol than beef, chicken and even salmon. Bison meat is higher in protein, iron and Vitamin B-12 than beef. Nutritional comparisons for fat content (per 3.4 oz serving): bison 2.42g, beef 8.09g, chicken (skinless) 7.41g, and salmon 10.97g. Lone Palm Bison Company recently began sales of their USDA-processed bison meat which can be purchased locally or shipped directly to your door.  For more information, contact Deb Mauldin at 803-606-6164.

Willing to oblige wandering sightseers and the curious, the owners urge caution, both in terms of roadway gazing to approaching the fenced pastures. Personal safety as well as traffic safety should be exercised when viewing the grazing animals.  There is no guarantee of a bison sighting within the pastures near the roadway, but if you are fortunate, you will be filled with awe and amazement.  As quoted on the Lone Palm Bison Company website, “Bison is a symbol of hope. Our hope is to build the breed. We feel deeply privileged to own such magnificent animals.”

2 Responses to "A Herd of Buffalo in Edgefield County"