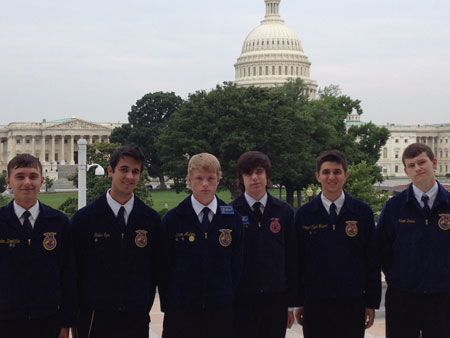 The weeklong program provided information for the FFA members to improve their leadership skills and prepare for leadership roles in their chapters, their communities, and their future careers. They attended workshop sessions on persuasive communication, character leadership, and building relationships, and they participated in discussions on citizenship and took part in service learning events.

The students learned the importance of advocacy for causes about which they are passionate.  They learned about worthy causes such as hunger, poverty, natural disasters, education, and the importance of community.  The students had a chance to create their own “Living To Serve” plans which they intend to carry out in their lives and in their towns.

Advisor and Coordinator, Agricultural and Rural Education with the U.S. Department of Education. “Tomorrow’s leaders must develop skills in these areas to effectively compete. Every student leaves WLC with an advantage because it gives those young people cutting edge leadership skills and valuable insight for productive citizenship.”  The National FFA Organization coordinates WLC, which attracts participants from across the country.

Quotes from FFA members who attended:

“WLC helped the students refine their character; the conference opened their eyes to the parts of the world that need aid and create a plan to help said communities,” says Caleb Brock, Calhoun Falls FFA member.

Highlights of the trip included a short tour of North Carolina A&T in Greensboro, NC, and a tour of the Lincoln, Jefferson, and Franklin Delano Roosevelt Monuments. The Korean, Vietnam, and World War II Memorials were also visited.  The group spent a morning at the Capital, which included a visit with Representative Joe Wilson.  One afternoon, the members visited Arlington National Cemetery, where they watched the Changing of the Guard.

“It was a great pleasure to accompany these fine young people on this worthwhile event,” says Michael Crim, Ridge Spring-Monetta FFA Advisor. “Each participate received an intense course in leadership development and a history tour of our Nation’s Capital.”

Crim concluded by saying that on behalf of the RS-M FFA Chapter, he would like to thank the community that surrounds the school for their support in fundraising that made this trip possible. Over 90 people, organizations, and companies made donations, purchased banquet tickets, and bought auction items.   He looks forward to National Convention in October.