By Edgefield Advertiser on September 14, 20133 Comments 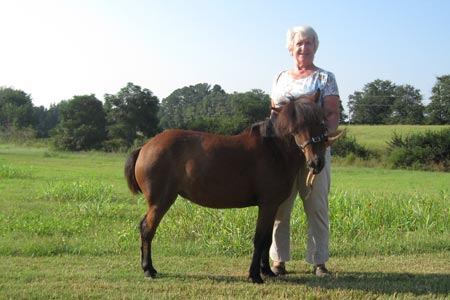 Martha MacDonald was unprepared for the sight that awaited her on the morning of June 29 when she went to her pasture to check on her horses.  There she found her 10 year old miniature horse with her lower lip hanging from her face.  Further inspection revealed the mini’s muzzle had been ripped off and her back legs bloody.  “Her hocks kind of looked like hamburger meat,” Ms. MacDonald said in an interview with The Advertiser about the incident.  “She could barely walk,” she reported and added that even the roof of her mouth had been inured.  Ms. MacDonald said in the days that followed she was sure she would loose her little driving pony.

Ms. MacDonald suspected the culprits of the attack on her mini to be a pack of dogs that roam the neighborhood near her Water Works Road home in Johnston.  Ms. MacDonald does not feel the dogs are wild but believes they belong to a careless owner.  Prior to the attack, she said the pack, believed to be made up of at least 5 dogs of varying breeds, had been spotted numerous times throughout the neighborhood in the early morning and late evening hours.

Ms. MacDonald’s suspicions as to the attackers seemed to be correct as approximately 10 days after the attack on the mini, she found 2 of the suspected dogs had returned.  Going out to the barn that morning, she found one of the dogs had even made it into the barn.  While the dogs ran from the scene, Ms. MacDonald said she would have no trouble identifying the dogs, one of whom she described as a yellow lab and the other as a black and white pit bull.

Fortunately, Ms. MacDonald’s initial fear for her mini’s life did not come true.  She survive the attack, but, to Ms. MacDonald’s great dismay, she had to have her lower lip amputated.  However, her veterinarian assures her it will grow back.  Happily, her hocks have heeled, and Ms. MacDonald reports she is back to her old self.

Ms. MacDonald’s ordeal seems to highlight a problem throughout the county; animals running at large.  Just this week (the week of Sept. 2), a report with the Edgefield Count Sheriff’s Office noted a response to such a call at Dupriest Circle in the North Augusta (Edgefield County) area.  According to that report, the animal owner was issued a ticket for animals running at large.  Fortunately, there were no injuries reported from this incident.  Interestingly, the report stated that this was the third complaint made against this pet owner.

Ms. MacDonald said she is concerned over such instances not only for the safety of other pets but for children as well.  As she stated, her mini is 38 inches high. If it was an easy target for the dogs in her neighborhood, “a small child could just as easily be attacked.”

Ms. MacDonald did contact the ECSO to report the attack on her miniature horse.  While she declined their offer to set traps for the dogs, she did take note of their information regarding her rights to protect herself and her property.  In other words, Ms. MacDonald is now packing heat.  “I keep a gun handy,” she said.  Ms. MacDonald has also changed when she turns her horses out to pasture; she no longer turns them out at night.  While she said she would like the unknown owner of these dogs to keep them from roaming her neighborhood, she said she is prepared to protect her life and that of her horses.  “This old broad is armed and dangerous,” she warned.