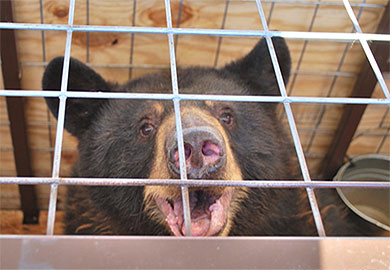 Six captive black bears were voluntarily turned over by their owners to the S.C. Department of Natural Resources on Monday, Oct. 7, and the bears were transported to a 720-acre wildlife sanctuary in Colorado, where they have begun a new life.

Three of the bears came from Spartanburg County and three from Greenville County. The bears range in age from 7 to 23 years. They were picked up Oct. 7 by wildlife and law enforcement personnel from the S.C. Department of Natural Resources (DNR), who then transported the bears in a 25-hour drive to Wild Animal Sanctuary in Keeneseburg, Colo. (www.wildanimalsanctuary.org), a facility that harbors many types of wildlife, including those seized by state and federal wildlife authorities. The non-profit Wild Animal Sanctuary is licensed by the State of Colorado, the U.S. Department of Agriculture and the U.S. Fish and Wildlife Service as a zoological facility.

“These bears will be as close to living in the wild as possible,” said Pat Craig, director of the Wild Animal Sanctuary. “We have them in small enclosures now, but in a few days they will be released into a 10-acre habitat that is very much a natural environment, where bears could even hibernate during the winter.” The Wild Animal Sanctuary is home to more than 300 large carnivores and omnivores.

“We understand it was a pretty bad situation these bears were in,” Craig said, “but as far as captive facilities, this is the best one in the world, and they will live in a really nice habitat.

DNR does not consider bear baying/baiting a legitimate field trial and has never issued and will not issue permits for this activity. DNR also does not consider the possession of black bears by individuals to be biologically sound, safe for the local community, or in the best long-term interest of the wild black bear resource.

“Bear baying is a cruel and horrendous abuse of bears in our state,” said Carol M. Elliott, president of Animal Protection Efforts (APE) of South Carolina. “DNR, supported by APE, a statewide animal protection organization, has been working diligently to eradicate bear abuse in South Carolina. Labor intensive investigation and evidence gathering by DNR has resulted in several arrests and bear rescues. We are very pleased that DNR will continue to investigate bear abuses in our state.”