By Edgefield Advertiser on November 8, 20133 Comments 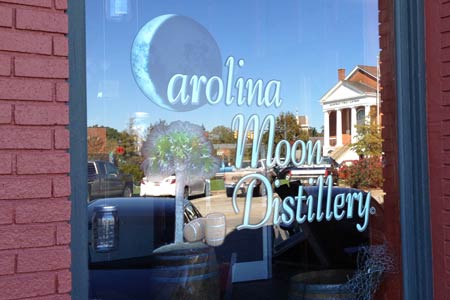 Edgefield County corn in a mason jar at last.  Edgefield is now the home of a licensed micro-distillery, Carolina Moon, located at 116 Courthouse Square.  Distillers David Long and Cal Bowie of Edgefield have the mash barrels bubbling, as the yeast converts Edgefield County corn into alcohol.  Soon the 70 gallon still in the back of the building will be fired up and corn whiskey will flow into the mason jars.

South Carolina has a long history of whiskey making.  Early Scotch-Irish settlers adapted to the new world by distilling corn whiskey rather than their traditional barley.  Whiskey was a common table drink in the cabins of the South Carolina backcountry in colonial times.  A Frenchman traveling the backcountry in the 1700’s noted, “Wheyski was our only drink.”  The Whiskey Tax of 1791 led to the evolution of the “Moonshiners” who continued to make their traditional liquor without bothering to pay the taxes.  Edgefield County has a rich tradition of moonshine and bootleggers.

Carolina Moon is committed to preserving the South’s tradition of fine corn whiskey.  The art of making clear corn whiskey will join the potters, the painters, the woodworkers and other artists who preserve Edgefield’s proud history.

Carolina Moon will operate a tasting room in the front of 116 Courthouse Square.  Guests can be offered three ½ ounce tastes of the corn whiskey.  Guest will also be able to buy up to three 750ml bottles per day.  There is also a gift shop beside the tasting room offering Carolina Moon merchandise, art from local artists and just neat gifts.

Initially only 80 proof clear corn whiskey will be offered.  Other flavors will be offered as the labels are approved by the federal government.  Flavors currently awaiting approval are cherry, peach, blueberry and black berry.  In the near future offerings will include: a honey whiskey, a lightly aged corn whiskey and apple pie.  Some of the production will be barreled and in two years Edgefield will have its own bourbon.

Initially the tasting room will be open only on Saturdays from 10:00 a.m. until 4:00 p.m. and by appointment for tour groups and special events.  A grand opening is being planned for mid to late November.  Y’all come by for a chat and a taste.