Visual Art and Art of the Word at J.E.T. Middle School 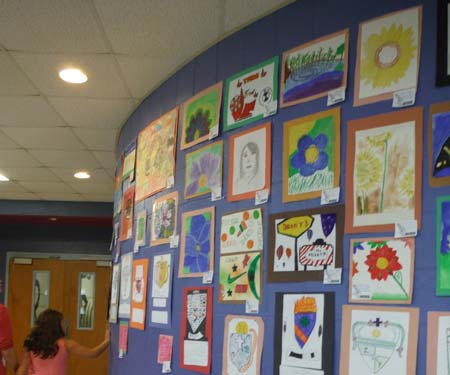 The visual arts and language arts department of J. E. T. Middle School opened their doors for a reception Monday evening, May 19, and for an opportunity to see the art work of the students and to hear their readings. A well-planned and well-executed program gave to the attendees two hours of entertainment that was both beautiful to see and stirring to hear.

Paintings, drawings and pottery lined the curved wall of the entrance hallway at J.E.T. The pottery was face pots done in the classroom of the art teacher, who acquired a Vision Grant so the students could have materials to emulate a local art, Edgefield Pottery.   The face pots were modernized examples of the African pots found in Edgefield Pottery works. (The Vision Grant was given to Mrs. Vartanian, art teacher.)

Students and parents and friends walked along the wall to examine favorite drawings and paintings – and cakes and punch were available to enhance the festive air.

Once in the auditorium, the students, again, were in the spotlight, as a group of presenters, lined in chairs on one side, held in their performance edginess as they got last minute instructions from two English teachers, Mrs. Prince and Mr. Murray. On stage was student Akaysha Mathis who was the “Hostess” for the evening, and who had such poise and candor that gave the audience a comfortable connection with her and were put at ease. No edginess in her to drift down to the audience!

The presenters followed suit. Their words – whether in poetry or story form – gave the listener an evening of connecting with the creative energies of the Middle School student. They filled the spectrum from funny to serious with poetry that played with words, especially prepositions of over, under, and around, to name a few. How proud their parents must have been to hear their thoughts, sometimes deep and sometimes prankish, carried out so creatively in poetry.

Fear of being caught in the wrong was touched on in a vignette about a broken window and how it was resolved by a family. One young man professed his faith through his poem, “My King.” Another took the title “The 100th Day of School” and dissected it into many meanings.”

The climax came when Mrs. Linda Nidiffer, at the podium, delivered to three young language arts students awards for their winning work during the year. Those winning were: Trent Cockrell, Catherine Lewis and Weston Whitfield. Her speech was both complimentary of the presenters as well as revealing of how the awards came about – very much from her mother’s promotion of education that resulted in Mrs. Nidiffer and her three sisters acquiring advanced degrees before retiring their studies. She challenged them to read and to write (and she does both well as seen in her article written almost weekly for this newspaper.)

One Response to "Visual Art and Art of the Word at J.E.T. Middle School"