By Edgefield Advertiser on June 11, 20142 Comments 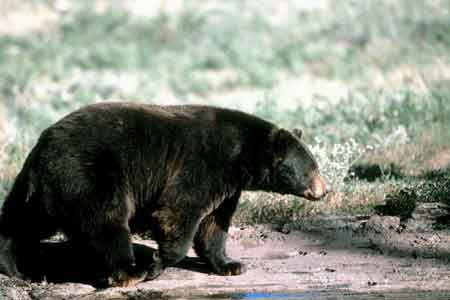 Edgefield Police Chief Ronnie Carter confirmed for The Advertiser, Wednesday, June 11, that there had been multiple sightings that morning of a bear in the town of Edgefield. According to Chief Carter, the bear was sighted on Rosa Hill, Pickens Street, Wells Road, and Eastview. Chief Carter himself saw the bear as it crossed the street in front of him. He described the animal as a black bear approximately 3 feet tall on all fours. The bear was last seen headed in the direction of Bi-Lo. There have been no reports of damage or aggression from the bear. He is described to be “just walking along.” Chief Carter said the Department of Natural Resources (DNR) was notified of the bear’s sighting.

The Advertiser spoke with DNR’s Black Bear Wildlife Biologist for the Upstate, Tammy Whactor, on Wednesday afternoon and while she was not yet aware of the this recent sighting, she did say bears in Edgefield County were not uncommon. Calling the bears that are found in the county “transient bears”, Ms. Whactor said these bears do travel through our area following food sources. Ms. Whactor said there are being a few more sighted bears as of late due to deer corn that is being put out to attract other wildlife. Ms. Whactor said the main thing to remember as far as these bears are concerned is “not to panic.” She said if a bear is spotted, one should “holler at them” and the bear should run off. Also important, Ms. Whactor said was the removal of food sources that may attract the bears. Those food sources include bird feeders, deer or hog corn, trash, and food scraps. Ms. Whactor cautioned citizens not to throw out trash or food scraps and advised that bird feeders be emptied as bears are particularly attracted to them.

As for trapping transient bears, Ms. Whactor said DNR does not like to trap bears if food sources are still present. She said, however, if food sources have been removed and a bear gets “stuck in town”, then that bear might be trapped for removal from the area. Ms. Whactor reminded, though, that if left alone and their food sources removed, these bears will should move on down river or return north.

To report a bear sighting, Chief Carter said one may call the Edgefield County Sheriff’s Office. Ms. Whactor said citizens may also call DNR’s toll free 24 hour number at 1-800-922-5431. While black bears are typically not aggressive, citizens are reminded not to try to approach or touch the bears.

As the nursery rhyme goes, “Just leave them alone, and they’ll go home wagging their tails behind them.”

2 Responses to "Confirmed Bear Sighting in City of Edgefield"