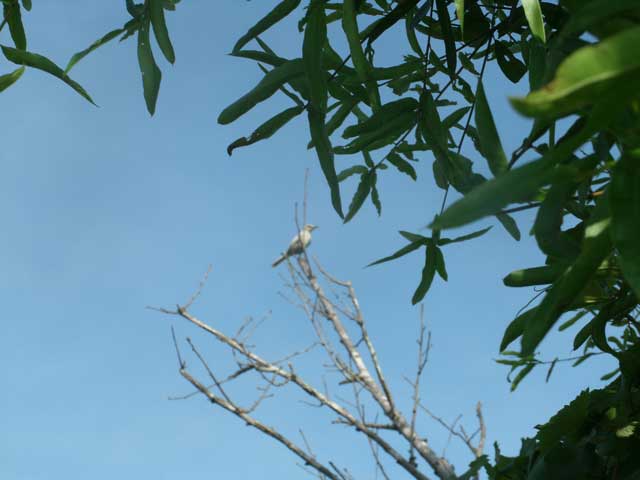 Gene Smith, once again, brings a wonder of nature to our attention, and this time it is a bird: “I could see that the bird had black eyes, so it isn’t a true albino; it’s a partial albino. In my experience, albinism (the absence of normal pigmentation) is more common in mammals than birds—so this really is a rare bird.” And after some more reconnoitering, the rest of the story: “I was out checking bluebird houses this morning [June 9], cleaning out old nests so the bluebirds will re-nest, when I saw the white mockingbird. It was my second sighting, and I was without a camera on both occasions. Today I called my wife, Carol, and asked her to bring me a camo shirt, to cover my white T-shirt, and my digital pocket camera. While I waited I noticed that the bird and its normally colored mate were using a small dead tree for a perch. Properly attired, I stepped behind a sweetgum tree and waited. Within five minutes the White One was on the limb, surprising me as much as pleasing me. The sweetgum had blocked my view of its approach, so when it suddenly appeared I had no time to anchor the camera properly to avoid hand-shake. It was point-and-shoot time, and that’s what I did.”  Gene Smith P. S. I’d like to get better photos. I’m switching to an old reliable 35mm Minolta and print film, and putting away the little automatic digital camera I used to get these.