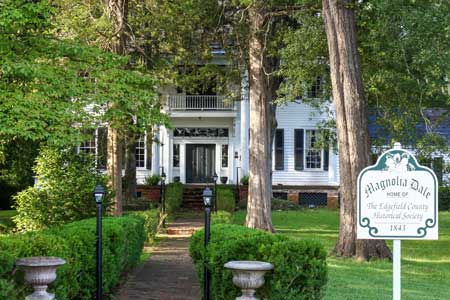 The Edgefield County Historical Society traces its beginning to the year 1939. In that year, inspired by the planning for the Centennial Celebration of the Edgefield County Courthouse which occurred in July of 1939, Mrs. Agatha Abney Woodson, a longtime local historian, brought together a group of Edgefield leaders to found the Society. The Society is believed to be one of the oldest, if not the oldest, county historical society in the State.

The Society will celebrate its 75th Anniversary with a Gala Reception on Friday evening, September 12, 2014 at its headquarters, Magnolia Dale, at 320 Norris Street in Edgefield. The event, which will be “black tie optional,” will begin at 7:00 and feature cocktails and a light supper with musical accompaniment. The public is invited. Tickets are $50.00 per person and can be obtained by calling the Society at 803-637-2233.

The initial meeting of the Society was held on Tuesday, June 27, 1939 at the home of Mrs. Woodson on Church Street. Dr. Robert L. Meriwether, Professor of History at the University of South Carolina, had been invited to meet with a group of citizens who had an interest in county history. An encouraging number turned out, including Miss Sarah Collett, Mrs. Sadie Hollingsworth, Mrs. Helen S. Nicholson, Mrs. J. L. Mims, Mrs. Frank Warren, Mrs. Warren Fair, Mrs. Allene Wright, Mrs. P. M. Feltham, Mrs. M. N. Tillman, Mrs. P. P. Blalock, Jr., Mr. J. Hord Allen, and Prof. Edwin Folk. Many others sent in their names to become members in case the organization was effected.

Mrs. J. L. Mims called the meeting to order and gave reasons for the organization of an Edgefield County Historical Society. She then introduced Dr. Meriwether, author of the acclaimed The Expansion of South Carolina, 1729-1765, who acknowledged his Edgefield County roots and then went on to make many useful suggestions for the Society. A nominating committee submitted proposed officers for the Society as follows: J. Robert Tompkins, President, Mrs. M. N. Tillman, Vice President, and Miss Hortense Woodson, Secretary-Treasurer. The officers were elected and began serving their terms.

The Society held its first Annual Meeting later that year on December 28, 1939 at the Edgefield Hotel (later the Plantation House). After an elaborate seated dinner, President J. Robert Tompkins presided over a well-prepared program, featuring several excellent musical presentations, historical papers by Miss Sarah Collett, Mrs. J. L. Mims and Mrs. M. N. Tillman, and the keynote address by then Congressman Butler B. Hare. The meeting ended with a series of toasts, including the final toast by Mr. Tompkins to “The Spirit of Edgefield Today.”

Over the years since its founding, the Society has done much to preserve and promote the rich history of Edgefield County. From the time of its founding, it has published many scholarly pamphlets, booklets and books on a vast variety of subjects related to the history of Edgefield County, including the following: “Edgefield County Judges” (1942), “Nicholson and Allied Families” (1944), “Dr. William Bullein Johnson and the Organization of the Southern Baptist Convention” (1945), “Edgefield Remembers the Mexican War” (1948), “General James A. Longstreet” (1951), “The Mims Families of Edgefield” (1951), “The Martins of Martintown” (1953), “The Hammond Family” (1954), “Norris and Kindred Families” (1956), “The Devil in Petticoats” (1960), “Edgefield in the Revolution” (1976), “Horn’s Creek Baptist Church” (1976), “Methodism in Edgefield County” (1977), “The History of Education in Edgefield County” (1985), “The Life and Times of June Rainsford Henderson” (1989), The Early History of Johnston (1993), “The Life and Works of Hortense Caroline Woodson” (1991), Lovely Village of the Hills (2006), “The Life and Times of Broadus Michelle Turner” (2009), The Story of Edgefield (2009), “The Founding of Edgefield County” (2010), Slave Records of Edgefield County (2010), “The Life and Works of Braidwood Lester ‘Braidy’ Holmes” (2010), “Celebrating the Life of William Miller Bouknight” (2011), “Celebrating Halcyon Grove” (2011), “Celebrating Darby” (2012), “The Story of the Pine House” (2013) and “The Early History of Horn’s Creek Church” (2014). One of the Society’s most appreciated publications is the green Edgefield brochure with the map of the downtown which was first published by the Society in 2003 and re-published in 2008. It is currently being revised and reprinted.

The Society has hosted or sponsored three major history conferences over the last two decades: In 1998 it hosted the annual meeting of the Southern Intellectual History Circle, the organization of the leading Southern History scholars from across the nation. Attending this meeting were C. Vann Woodward, Professor of History at Yale and one of the most renowned Southern historians of all time, Sheldon Hackney, noted Civil War scholar and then President of the University of Pennsylvania, and Drew Gilpin Faust, acclaimed biographer of Edgefield’s James Henry Hammond and now president of Harvard University. In 2001, the Society sponsored “The Edgefield History Summit Conference” in which approximately twenty-five nationally-recognized historians came and gave presentations specifically related to Edgefield history. In 2005, the Society hosted the annual meeting of the British Nineteenth Century Historians (BrANCH) which brought approximately thirty historians from Great Britain as well as a number of its American members to Edgefield. In February, 2015, the Society will again host the annual meeting of the Southern Intellectual History Circle.

The Society acquired the Old Law Building as its first headquarters in 1949 and Magnolia Dale as its second headquarters in 1959, which it now maintains as a house museum. In 1993, it initiated the effort to construct a museum which culminated, with the assistance of the South Carolina National Heritage Corridor, in the opening of the Joanne T. Rainsford Discovery Center in 2004. In 2010 the Society took over operations of the Discovery Center from the Heritage Corridor and converted the east wing of the building into the William Miller Bouknight Theatre, which is now also used by the Edgefield County Theatre Company for its theatrical productions. The Society also sponsored, or participated in, the restoration of the Furman Monument (1975), the Welcome Mural on Main Street (1978), the restoration of the Brooks Square in Willowbrook Cemetery (1981), the erection of the Strom Thurmond Statue (1984), the establishment of the Old Edgefield Pottery (1992), the Village Blacksmith (1998), Carpenter’s Stand (2001), the acquisition and construction of the Edgefield History Park (2001), the restoration of Magnolia Dale (2009), the construction of the Dr. Arthur F. and Esther Goldberg Edgefield Pottery Groundhog Kiln (2011), and the construction of the caretaker’s cabin at Horn’s Creek Church (2014). Over the years the Society has also sponsored, or assisted other organizations in sponsoring, many South Carolina Historical Society Markers.

In addition to its role in preserving and promoting the rich history of the County, the Society has always been committed to using our rich history to make Edgefield County more interesting and attractive to tourists and prospective residents and businesses so as to bring recognition and economic vitality to the region. Toward that end, it now operates the Discovery Center Museum, Magnolia Dale House Museum, the Old Edgefield Pottery, the Village Blacksmith and Carpenter’s Stand. It also sponsors the Edgefield History Class which has been meeting every Sunday afternoon at 3:00 p.m. for nearly twenty years. This Class is a casual gathering of persons interested in local history who discuss various subjects over coffee and cookies. The Class is currently being held at the Tompkins Library. For more information, call the Society office at 803-637-2233. In 2009 the Class authored The Story of Edgefield. It is currently engaged in writing The American Revolution in Edgefield – from Ninety Six to Augusta which the Society hopes to publish in the next several years.

One Response to "The Edgefield County Historical Society Celebrates 75 Years"