Looking Ahead to the Heritage Jubilee Festival

By Edgefield Advertiser on September 22, 2014Comments Off on Looking Ahead to the Heritage Jubilee Festival 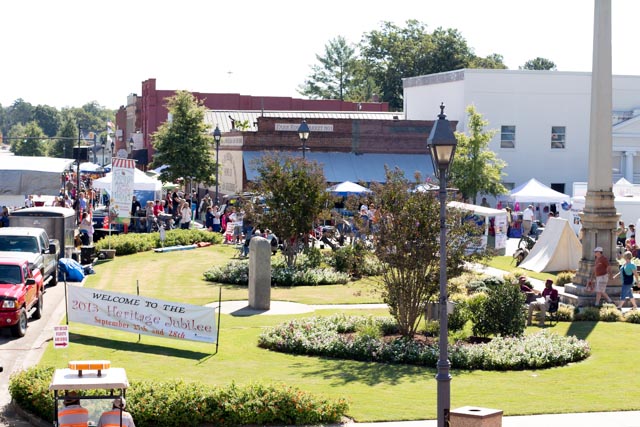 The September 24, 2014 print edition of The Edgefield Advertiser will be our Edgefield Heritage Jubilee Festival Edition. Be sure to pick up your copy at local convenience stores on Wednesday, or subscribe today to have The Advertiser delivered to your mail box each week.

Below, find a teaser to some of what will be in this week’s paper.

Welcome, hometown folks and visitors, to the festival that just last year came back to the square and was bigger than ever! There is something for everyone, and in this special edition we are offering salutes from the business community, whose ads make these six pages possible, as well as a guide for the festival.

The heritage of this old town has continued to inspire people to greater service (10 Governors for instance) and to noble experiments – alluding here to Prohibition which was addressed in the Southern Studies group of last week and which held leadership from this town. Changes in mores and social practices have come to this town as seen in the numerous, now, female-owned businesses and a distillery on the Town Square, to name two marked differences. Businesses have come and gone, and one in particular has shown its longevity, having arrived in the early 70s and is still growing – NWTF.

To give this special edition longevity, or make it into a keepsake, this newspaper adds stories that give evidence of the character of the Town of Edgefield. The big story this time is about the National Wild Turkey Federation, whose property on the outskirts of Edgefield is growing.  And they are telling us that Edgefield will be welcoming more visitors than ever before as this project grows.

Some of the turkeys that NWTF had on hand “marched” into Edgefield and took positions around the square and down Main.  Though they are plastic, they hold paint very well and have been dressed to signal the business they represent. And they have been mounted (like on a pony) by children to get their photos made, in Edgefield.

Edgefield is a special place, and we honor turkeys as well as pottery.  And this year the PTC Pottery Center (particularly interested in economic development in their students’ lives) is opening its doors for a tour of the premises and a chance to buy their wares.

Over the last few years, the history of Edgefield (the Heritage in the title) has been acknowledged during the festival, and this year, again, this will happen. On Friday is the exposition of the Hunley, at the PTC parking lot, with traditional crafters and re-enactors at the site showing their wares and armaments, sponsored by the Old Edgefield District Genealogical Society (On Saturday these move to the Town Square). A visit there, and to the Pottery Center, will edify the tourist in much about our history.

And don’t forget the 9 food vendors and 40 craft vendors awaiting the crowds to come. Find lists of those on page 4 of the print edition