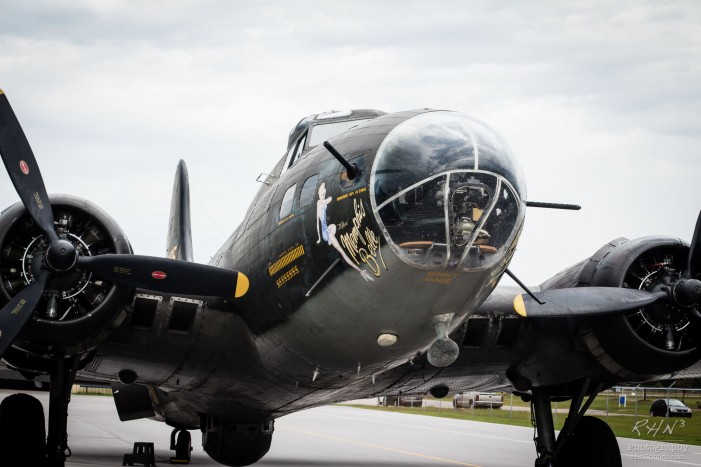 The World War II Boeing B-17 Flying Fortress “Movie Memphis Belle” will take to the skies over Augusta and Columbia. Public flights will begin in the morning with ground tours in the afternoon.  Hours are from 10am to 5pm.

The Liberty Foundation’s B-17 “Memphis Belle” is one of only 13 B-17’s that still fly today. The B-17 dubbed the “Flying Fortress” as a result of her defensive fire power saw action in every theater of operation during WWII. The majority of all WWII B-17’s were operated by the 8th Airforce in Europe and participated in countless missions from bases in England deep into enemy territory. There were 12,732 B-17’s produced between 1935 and 1945, of these 4,735 were lost in combat. Following WWII, the B-17 saw combat in three more wars, B-17’s saw service in Korea, Israel used them in the war of 1948 and was even used during Vietnam. “Memphis Belle” was built toward the end of the war and never saw any combat. It is painted in the colors and nose art of the original historic “Memphis Belle” B-17 that flew countless missions with the 91st bomb group of the mighty 8th Airforce, and was the first B-17 to complete 25 missions.

The Liberty Foundation’s B-17 had an interesting postwar history. Sold Surplus to National Metals Co. of Phoenix, Arizona for the sum of $2,687.00 and then sold to Fast Way Air of Long Beach, California. 44-83546 became N3703G on the US civil register. In 1960 she was converted to a water bomber and operated as Tanker 78 until the late 1970s. N3703G was purchased by the Military Aircraft Restoration Corporation (MARC) in 1982. MARC, was started by David Tallichet, a wartime B-17 pilot with the 100th bomb group. He and his staff restored the B-17G to resemble a B-17F model. The restoration included reinstallation of power turrets, early tail gunners compartment, early Sperry dorsal turret recovered from a south Pacific wreck and adding a 91st BG paint scheme

The Liberty Foundation’s B-17 provides visitors the opportunity to take a step back in time and gain respect for the men and women who gave so much to protect our freedoms. At each stop, flight “missions” are available in the Memphis Belle, which allow people to take flights in this historic aircraft. During flight operations, there will be a designated, secure area for those who would like to watch the aircraft flights at no charge. For enthusiasts that choose to take a flight experience on this legendary aircraft, these participants receive a pre-flight safety briefing containing the historical significance of the aircraft and a spectacular scenic air tour around the city. During the flight, passengers enjoy the unique opportunity of moving about the aircraft to the different combat crew positions to see the viewpoint that thousands of our heroes saw in combat over 60 years ago. World War II was the single greatest challenge to freedom in the 20th Century. Through the 46 months of war, over 300,000 American soldiers, sailors and aviators died defending the beliefs that they held dear, with many more sacrificing in other ways. These men became our heroes through their struggles and came home to a grateful nation. Over the half century since, those heroes became our husbands, uncles, fathers and grandfathers; in many cases their stories were never shared with their families. Now with the popularity of movies like “Pearl Harbor” and the Steven Ambrose book “The Wild Blue”, families are seeking to learn more about our veterans. They realize that these stories of courage and valor need to be preserved for future generations. Estimates place the number of World War II veterans dying each day at over 1,500. With each death, another story of courage, honor and sacrifice is lost forever. This aircraft represents that legacy of courage and valor.”

The B-17 flight experience takes 45 minutes with approximately half hour in flight. B-17 Flights are $410 for Liberty Foundation members and $450 for non-members. Passengers can become a Liberty Foundation Member for $40 and receive the member discount for family and friends.  While the cost to take a flight sounds expensive, it must be put into perspective when compared to the B-17’s operating cost.  A Flying Fortress cost is over $4500 per flight hour. The Liberty Foundation spends over $1,500,000 annually to keep the B-17 airworthy and out on tour. The Liberty Foundation is a 501(c)(3) non-profit flying museum and funds generated merely help offset these high cost.  Only the public’s interest and other generous donations keep this historic aircraft flying and from being silenced permanently in a museum for years to come.  Hopefully, for years to come!

This is your invitation to see, tour and fly a mission and take advantage of this ultimate historical experience, come touch the past and fly through ageless skies.