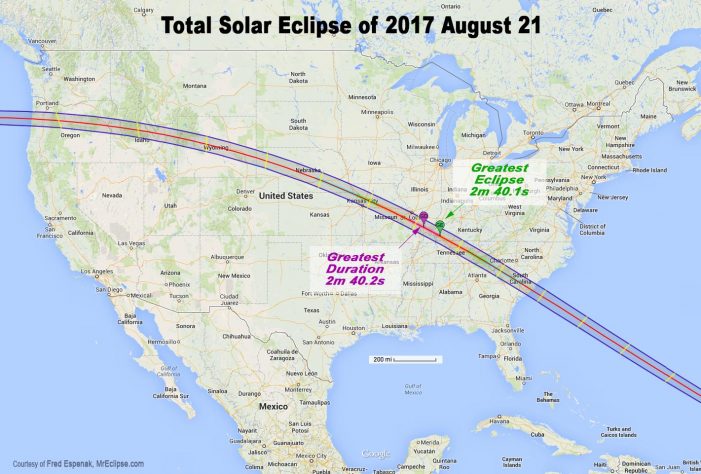 GREENWOOD, S.C. – Greenwood is one of many U.S. cities in the path of the next total solar eclipse, expected to occur on Aug. 21, 2017, across the continent.

Lander University, just north of Greenwood Uptown, is perfectly positioned for people to observe and record the historic event.

This will be the first total eclipse in the U.S. since  1979 – and the first one to travel coast-to-coast in almost 100 years.

“The last time a total solar eclipse crossed the U.S. coast to coast was in June 1918,” said Dr. Rick Fienberg, press officer with the American Astronomical Society (AAS) in Washington, D.C. “But unlike that one, which was witnessed by relatively few people, this one will likely be the most-viewed solar eclipse in history.”

The AAS estimates that more than 10 million people are in the 65-mile-wide path of the total eclipse – and more than 500 million in the U.S., Canada and Mexico will have an opportunity to see at least a partial eclipse.

Based on AAS data and charts, the eclipse will touch over land at approximately 10:15 a.m. just north of Newport, Ore., and end its land sweep around 2:50 p.m. in McClellanville, S.C.

During that time, it will cross a total of 14 states including Idaho, Missouri, Kentucky and other parts of South Carolina.

Greenwood’s time to witness the eclipse will come near the end of the sweep, starting around 2:39 p.m. and lasting for about 2.5 minutes.

“Total solar eclipses like this one are rare occurrences for any given point on the Earth’s surface,” said Kelly Hughes, Technical Services Manager with Lander University’s Information Technology Services and Chair of the Solar Eclipse Planning Committee. “They are awe-inspiring experiences for many, and events concerning this occurrence are being planned now for the campus community.”

Greenwood / Edgefield in the Path of Rare Solar Eclipse   added by admin on January 17, 2017
View all posts by admin →