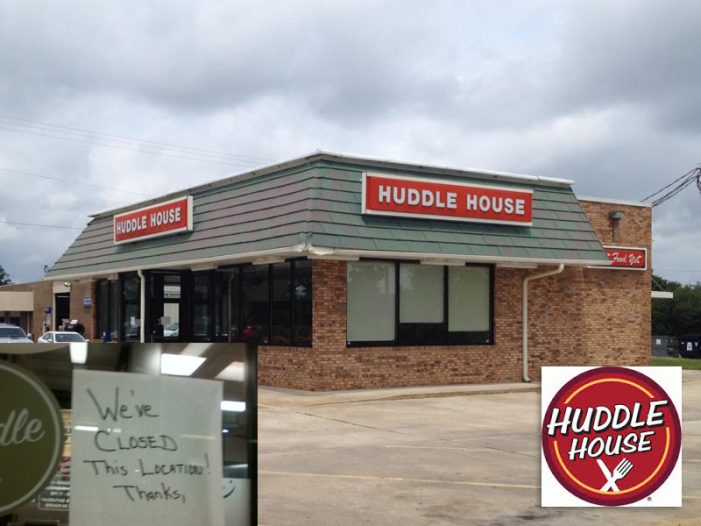 The Advertiser has learned that the Huddle House in Edgefield has once again closed for business.  A sign was placed on the front door to the restaurant, Thursday, May 18, that read, “We’ve Closed this location! Thanks”.  The Advertiser did contact the corporate office of Huddle House for information regarding this closing, but they were unable to comment.  We were asked to consult with another firm, All Points Public Relations.  MacKenzie Coopman, a Public Relations Associate with All Points, said in an email statement to the Advertiser that the Huddle House in Edgefield closed yesterday because “the franchise agreement term for this location has expired.”  The statement went on to say, “Huddle House is grateful to the Edgefield community for the many years of business and greatly appreciates its customers’ loyalty.”

The Advertiser has reached out for comment as to whether not another franchise owner may be sought for this Huddle House location or if there were any plans to re-open Huddle House in Edgefield.  In an email statement received Monday, May 22, Coopman said, “We can’t project when or if a restaurant might open or re-open in the Edgefield area.”

The Advertiser was able to speak with an employee of the Edgefield Huddle House, who spoke to the Advertiser regarding the restaurant’s closing on the condition of anonymity.  That employee stated that while the manager of this location was informed of the impending closing about week before it happened, she was unable to share that knowledge.  As such, there was no advance warning for the other employees or the patrons.  However, the employee who spoke with the Advertiser said that it is not believe the restaurant will re-open again.  Major work that needs to be done to the property, including roofing, electrical, and plumbing, as well as the fact that it was understood that the owners would be moving all the equipment from this location, were cited as reasons for the belief that the restaurant will not re-open.  The employee did share that employees of the Edgefield location are being offered jobs at the Huddle House in Saluda.

This is the second time Huddle House has abruptly closed its doors since it first opened in Edgefield.  The first closing was in the summer of 2012.  At that time, Mike Weamer with Huddle House stated that the reason for the closing was due to the franchise owner “exiting our system.”  Huddle House did re-open a little over a year later in the fall of 2013.  Then, in the fall of 2014, the Advertiser received word via employees of the restaurant that it would again be closing when all of its inventory was depleted.  That story was refuted by members of ISA Restaurant Group who stated that they enjoyed serving the patrons at the Edgefield location and had “no intentions of closing this Edgefield restaurant or any of our Huddle House locations.”

As the Huddle House employee who spoke with the Advertiser stated, “You hate to see any business close.”  And this closing will no doubt be felt by the faithful patrons and the employees.

The Advertiser will continue to follow this story and bring updates if they become available.  To view our previous coverage of Huddle House, please visit our website, www.edgefieldadvertiser.com and search Huddle House.

Huddle House in Edgefield Closes – Again [Updated Again] added by admin on May 22, 2017
View all posts by admin →