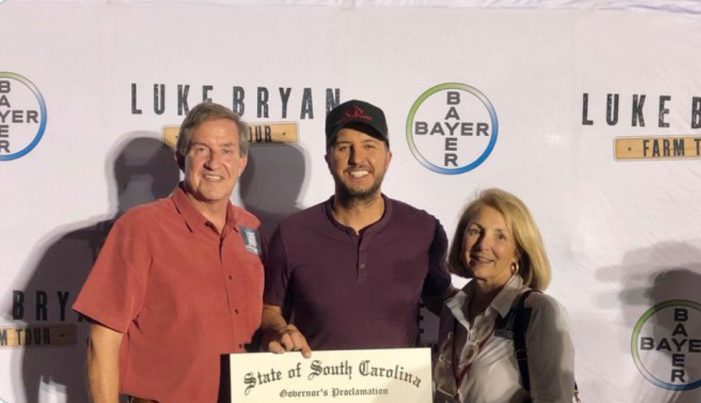 Friday night Luke Bryan’s Farm Tour 2018, in Edgefield County, welcomed SC Agriculture Secretary who presented Luke Bryan with a commemoration, declaring from the SC Governor’s Office “October 5, 2018 Here-to-the-Farmer Day – Thank you South Carolina Farmers and farmers across the nation for everything you do.”

By Scott Cooper, who resides at Misty Farms where the event took place.

Friday evening, October 5, a little after 9 p.m., award winning country artist Luke Bryan took the stage in Edgefield County for an amazing performance; however, his Farm Tour festivities began in a field in the southern part of our county about 7 hours before Bryan took the stage!

I will share two photographs, to show how Luke’s logistical team transformed a hayfield from an empty field, to an arena, then back to a clean field within a period of 72 hours! I would encourage readers to sign on to their social media accounts and use the hashtags #FarmTour2018 and #EdgefieldSC to see an abundance of photographs and video’s of the fun which took place in our historic county last Friday night.  You can also use the hashtag #HeresToTheFarmer.

One of the tweets resulting from the concert in Edgefield County was from Bayer, the concerts sponsor, picturing South Carolina’s Commissioner of Agriculture Hugh Weathers, who was in attendance, presenting Luke Bryan with a Certificate signed by South Carolina Governor Henry McMaster declaring Friday October 5, 2018 #HeresToTheFarmer day, thanking our farmers for everything they do!  I believe our state representative Bill Hixon had a hand in getting this accomplished! Also performing Friday night from 6 p.m. to 9 p.m. was Chris Rice, The Peach Pickers, Jon Langston and DJ Rock.  Prior to the gates opening at 5 p.m., people began tailgating in the fields as early 2 p.m., when the gates opened.  People were lined up ready to enter as early as 1:15!

As the operator of Misty Morning Farms, where the event was held, the days leading up to the concert was is when the reality of it really started to kick in, as we made final preparations and all the equipment was unloaded the day before and day of the event.  My personal concern was the amount of trash that might be left behind.  I had been guaranteed the logistics team would do a thorough job cleaning the fields, and when I inspected the fields with them Saturday afternoon, I was not disappointed.  My wife Suzy and I actually went back out to the arena area at 1:15 a.m., less than two hours after the event was over, and could not believe how rapidly the stage had come down, and how clean the arena area already was!  Everyone involved with the logistical team supporting Luke Bryan’s tour are true professionals, everyone.

This event also was a huge success because of the teamwork of many departments and agencies, across governmental lines.  Security included Edgefield County Sheriff’s office, North Augusta Public Safety, State Police as well as private security.  The traffic plan by DOT was executed well and EMS and Merriwether Fire Department performed flawlessly.  There are far too many individuals to list who ensured this event was executed flawlessly, which is a great testimony to the professionalism of our government officials who serve all of us.

One Response to "Over 10,000 visit Edgefield County to hear Luke Bryan!"