A New Restaurant in Trenton 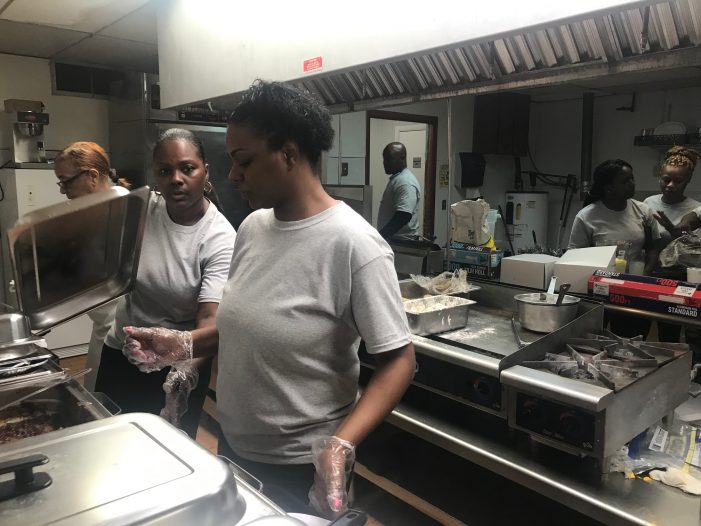 Owner Michele Addison is pictured center left, with “dishwasher and all-round male helper” (according to him) in background with two of the waitresses, on Sunday.

It was one day after International Woman’s Day (Friday, Mar. 8), but the feeling of “women at work and making things happen” continued into Saturday as Michele Addison and her daughter Crystal cooked all day and fed many friends and family for a “soft opening” of their new restaurant, “Ms. Chele’s Soul Food.”

Several waitresses in uniform (black pants and a grey T-shirt that gave the name of the restaurant on the back) were taking orders and delivering food – take-out and eat-in – to those attending the soft opening on Mar. 9.  The food is American Soul Food and good, as determined by the writer of this article – ordered for her palate: macaroni and cheese, collards, butterbeans, meatloaf, fried chicken and cornbread, among the many choices.

Ms. Chele is in Trenton, in the spot where several Mexican cuisine restaurants have been in the last few years, among them Los Jarochos which lasted many years to rave reviews. All the Mexican memorabilia is gone and the décor is a clean sweep of grey, black and white, the walls adorned by sayings (in black and white print) such as: “When one door closes, another one opens”; “Let all that you do be done in love.”

A New Restaurant in Trenton added by admin on March 18, 2019
View all posts by admin →

One Response to "A New Restaurant in Trenton"