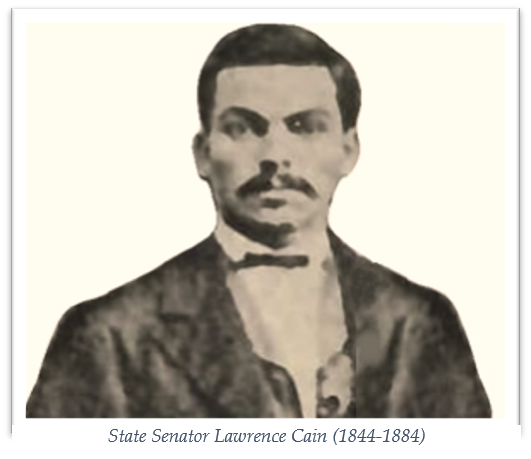 The Edgefield County Historical Society will hold its Spring Meeting on Sunday, March 10, 2019, at 3:00 p.m. at the Joanne T. Rainsford Discovery Center at 405 Main Street in Edgefield.  The Meeting will be devoted to the remembrance of State Senator Lawrence Cain (1844-1884) who played a significant role in Edgefield County during Reconstruction.

Born a slave in 1844, Lawrence Cain served in the Confederate Army as a body servant to Captain Thomas W. Carwile of Edgefield and surrendered with McGowan’s Brigade and the South Carolina 14thRegiment, Company D at Appomattox Court House, Virginia.  After the War he devoted himself to opening a school in Edgefield for African Americans, and then became involved in Republican Party politics. He was elected to the South Carolina House of Representatives in 1868, and became a State Senator in 1872.  In 1873, he enrolled in the University of South Carolina Law School with the first class to include black students and graduated in 1876.  In the tumultuous election of 1876, he was ousted from his Senate seat by former Confederate General Martin Witherspoon Gary.

During his political career, Cain fought valiantly for the political rights of the former slaves and worked hard to improve their educational, economic and religious environment.  However, unlike some of his Republican colleagues, Cain was a virtuous man who acknowledged the fraud and corruption of the Republican administration and voted in 1872 for the impeachment of the Republican Governor Scott for high crimes and misdemeanors. When Cain died in 1884 at the age of nearly 40 from complications of tuberculosis, the Edgefield Advertisereditorialized: “In the day of his power, Cain was not malignant.  Circumstances threw him upon the top of a wave in an evil day but he was, nevertheless, ever an amiable and well-disposed man.”

The distinguished historian, Dr. Orville Vernon Burton, Professor of History at Clemson University, and Emeritus Professor at the University of Illinois Urbana-Champaign,will deliver the keynote address.  Professor Burton, who has done extensive research and writing over many decades on Reconstruction in Edgefield County, will provide the background and context for the role that was played by Senator Cain.

Also, our own Edgefield native, Dr. Julian Landrum Mims, an accomplished historian in his own right who did a Master’s thesis on Radical Reconstruction in Edgefield County at the University of South Carolina, will speak.  Mr. Kevin Cherry of Philadelphia, Pennsylvania, the great, great grandson of Lawrence Cain, who is writing a biography of his ancestor, will provide some of the details of Cain’s life and career.

At the meeting, the Society will unveil an interpretive panel in the Discovery Center giving the biographical highlights and contributions of Lawrence Cain.  As many as twelve of Cain’s descendants from all over the country will be in Edgefield for the meeting.  This promises to be a memorable event to which the public is cordially invited.