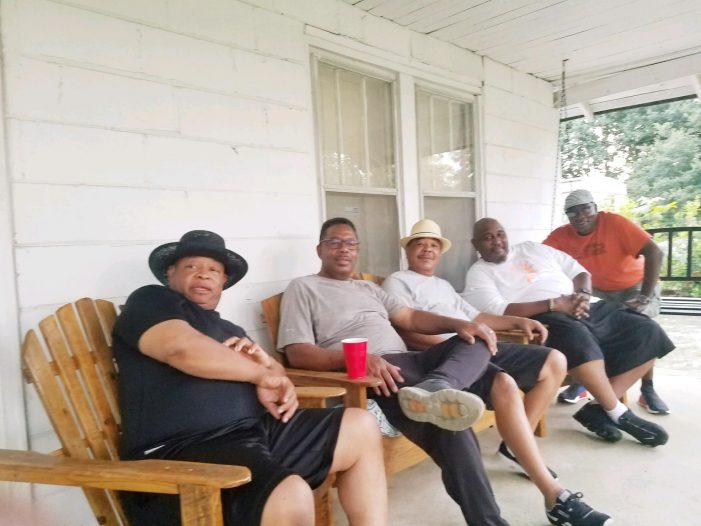 At Shaws Creek Baptist Church’s Homecoming-Day Services, July 28, 2019, there was a family group that brought back many memories to me, from long ago.  I attended school with two of Mr. George and Mrs. Alberta’s children – Freddie Lee and Nelba Mathis.  We also attended Shaws Creek Church and Sunday school. They graduated from Bettis Academy. It was a joy to meet some new and younger family members and reminisce with others. By Ethel Butler

Ms. Loretta Jones-Ware, a granddaughter of Mr. George & Alberta Mathis, captured the events of their family’s visit, below.

Descendants of George and Alberta (Ouzts) Mathis visited the family home, church and share-cropping site during their recent family reunion.

It has become a tradition for children of the late Horace Jones Sr. and Josie Ruth (Mathis) Jones to open the family home in Aiken, South Carolina, every 4thweekend in July.  Family and friends are invited to share a weekend of good food, fun and reconnection to their roots.

This year (2019) descendants of the late George and Alberta (Ouzts) Mathis attended.  The weekend included a fish fry on Friday night, Saturday shopping trip to the Augusta mall, a visit to James Brown sites, tour of the Shaws Creek Baptist Church where 3 generations of family members are buried, drive-by tours of the Marsh Farm where George and Alverta were share-croppers, and the Bettis Academy grounds where Freddie Lee Mathis and Nelba Mathis graduated.  Saturday night a wonderful soul food dinner was enjoyed at 3rdGeneration Catering and Family Restaurant in Johnston, S.C.  Sunday, the family attended service at Shaws Creek Baptist Church, where Rev. R. C. Holloway preached his retirement sermon and revival began.  The family enjoyed the meal that was served by the church staff and appreciated the hospitality shown.

Mathis Family Homecoming  added by admin on August 19, 2019
View all posts by admin →