From Paris in the Time of Coronavirus 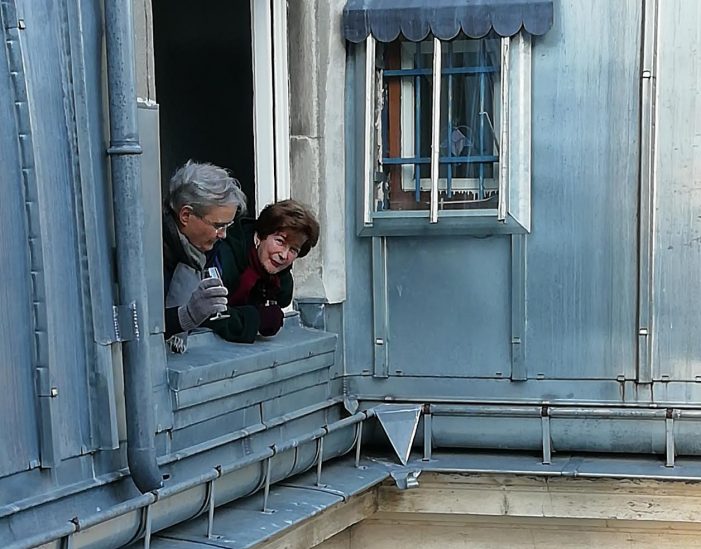 A New “Hanging Out” at Aperitif time, on the 5e etage (6 th floor),
at which time the Normans stop and applaud the health professionals.

By Dr. Elizabeth Joiner, retired French professor at University of S.C. in Columbia, who lives in Paris with her husband Dr. Buford Norman, also retired USC French professor. Visitors to Edgefield over the years, the Normans were in Edgefield February 1 and the EA editor was a visitor in their Paris home before the explosion of the virus in the US and Europe.

Yesterday (March 31) was the last day of our first 15 days of confinement, and today marks the beginning of our second two-week period of confinement. What we are experiencing here is more than the lock down that our American friends talk about. We have to have a document signed on our honor to leave our residence. There are just a few acceptable reasons. People can go to the pharmacy or to a doctor or to buy food and other necessities that are available in a store such as a supermarket that sells products in addition to food.

Exercise is permitted for one hour a day if you stay within one kilometer of your house. There are a few other acceptable reasons such as going to work if you are unable to work from home. Fines exist for breaking the rules, and they can be pretty stiff, $150 and up. We go out only for exercise and for food purchases. Younger people in our building bring us certain things so that we won’t have to stand in line for a long time at supermarkets.

People who have two homes and would like to move to their vacation home for the second two weeks are denied that possibility. We heard of the plight of one man who works in Paris and has a pied à terre here for work. He normally lives with his wife and daughter in their principal residence in another town. Because of the confinement, he cannot go to be with them. Thank goodness for the internet!

Isolation can be a problem, especially for those living alone. I have a wonderful housemate (husband), as you know. You probably also know that the French go to their windows or balconies every evening at 8:00 p.m. to applaud the healthcare workers. That is how we met the young couple who live just under us. We already knew the neighbor who lives just across from us. She took the initiative of suggesting that we gather at our windows for an apéritif at 7:30 p.m. and then join in the applause at 8:00. She and our downstairs neighbors go to their windows, and we go to the window on the landing between the apartments. The proper distance is maintained, and we can all hear each other. We meet two or three times a week, and this has been a nice break for us. We also have a yoga break. Our instructor comes into our living room via internet.

You may have heard about the TGVs (fast trains) that have been outfitted as hospitals to transport patients from hospital to hospital. I will send you some interesting footage.

Hope this gives you an idea of what “sous cloche”* (see addendum below) means. Stay well and keep in touch! We’ve had almost nothing but full sunshine since you and Lydia left. The apartment is flooded with light, and that helps keep spirits up. Also, all the specialty food stores are open, so we eat and drink well.

*SOUS CLOCHE: So, how do you translate an expression like that? Maybe “put under a bell jar” would be the best. Bell jars are often used in laboratories to form, and contain, a vacuum., so France “sous cloche” would mean that the French population would be contained in the sense of isolated. As to an equivalent English idiom, I think that “lock down” seems to be what the English-speaking world is using. I think that using a lock versus a bell jar is interesting. Another interesting comparison is “confinement” which is used in France while “sheltered in place” is used by Americans.

From Paris in the Time of Coronavirus added by admin on April 15, 2020
View all posts by admin →

One Response to "From Paris in the Time of Coronavirus"