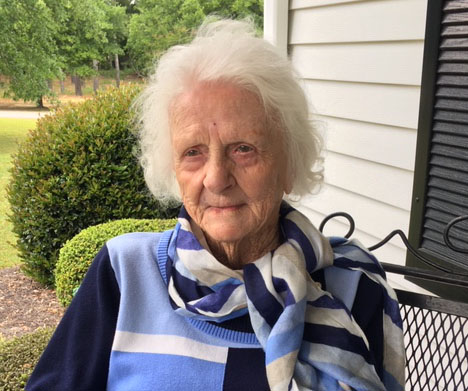 Due to the COVID-19 virus, the 37thannual Johnston, SC, Peach Blossom Festival was cancelled this month, but the Festival wants to proudly recognize the selection that had been made for the parade’s Grand Marshal: Martha Gibson, a well-known and well-loved member of the community.

Mrs. Gibson has spent most of her adult life making Johnston and Edgefield County a better place to work and live.

Born in Charleston in 1923, she moved to Aiken in the late forties after graduating from Winthrop University to teach music at the old Aiken Elementary School. One night at a drive-in movie theater, she and a teaching friend both met their future husbands in the car parked next to them. She would marry hers, the late James William Gibson of Johnston, June 12,1953.

Moving to Johnston shortly thereafter, she would lead a life of public service in the school system for the next 30 years with periods of teaching at Edgefield High School, W.E. Parker and Johnston Elementary School, all while raising five children.

A faithful member of Harmony United Methodist Church for nearly 70 years, Mrs. Gibson played the piano and was very active in children’s programs, Vacation Bible School and numerous committees. She has also been an active member of the Johnston Women’s Club.

Mrs. Gibson speaks warmly on all her years spent in Johnston and the Ridge, which “has always been so very nice, everyone knew each other and helped each other.” She remembers her years in the classroom fondly too, although there were often both challenges and challenging students.

Even today while out in town, it gives her great joy to run into a former pupil who remembers being taught or helped or guided by Mrs. Gibson. Her favorite part of teaching: “When you finally made a connection with a child – giving the gift of learning.”