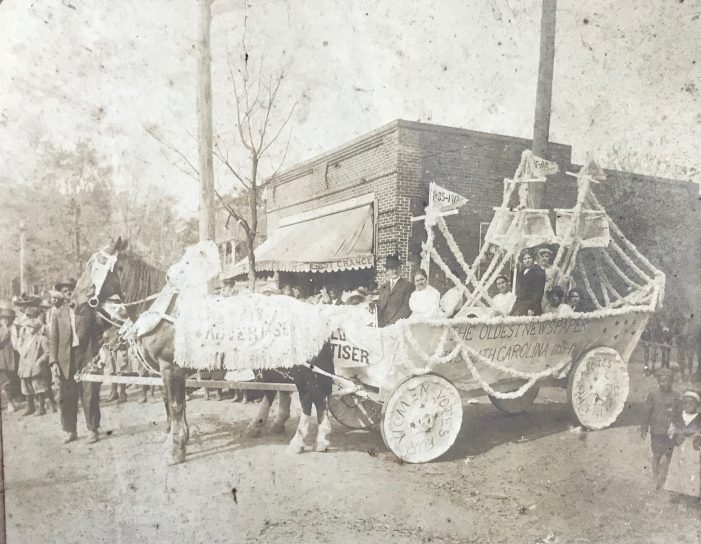 The photo above tells the story of The Edgefield Advertiser and its backing of the 19th Amendment, voted on in 1920.  This photo was made in 1918 during a parade in Edgefield when the Advertiser publicized both its age and its stand on Women’s Suffrage.  Examine the wheels to see written: “For Women Votes.”  Seated in the driver’s seat are the Editor Julian L. Mims and his wife Florence Adams Mims.

The Edgefield Advertiser in this century gave two years of columns to the story of WWI as it was seen in the columns of this newspaper, 1917-1919 (columns printed in 2017-2019). What was apparent in a large portion of the articles was the dedication of the women of the Edgefield area to doing their part in producing whatever they were capable of making – knitted sweaters, scarves, socks, gloves, bandages – for use by Edgefield’s and the Nation’s soldiers at war.  They even prepared meals for the inductees to carry with them as they left Edgefield to join the forces at nearby camps.

Women gained great strength during this time, as Tommy Strother, the editor and writer for the WWI 2020 story mentioned above, concluded in some of his remarks, made here in a speech delivered in Edgefield and in print, that as women became organized for the War, they continued to throw that energy and spirit into other movements, such as Suffragette.

In the Editorial Column of the January 21, 1920, Advertiser were these words from the Editor, reviewing what was expected in the upcoming S.C. State Legislature: “Another big question, large if for no other reason because both great national political parties are tooth and toe behind it, is the ratification of the suffrage amendment. At this time, before the fair suffragists march this week in one solid phalanx upon the Capitol, the sentiment in both houses is against the ratification of what will, soon or later, become the nineteenth Amendment to the Federal Constitution, placing the ballot in the hands of the American women.  On this issue the Edgefield delegation is divided at this time – one against and two for ratification.”

(South Carolinians voted a week later, in late January 1920, for or against the woman’s right to vote. It did not pass in South Carolina, but did in 36 other states during the year of 1920. Thirty-six states was enough to ratify the 19thamendment, when Tennessee, on August 18, 1920, voted as a state for the amendment. South Carolina was among the 12 states that voted against.  S.C. did not certify the amendment until August 22, 1973.)

In Edgefield, the vote for women was not so popular; this present newspaper has never seen the tally of votes that came out of the election in November of 1920.  However, the Editor of the Advertiser, Julian Mims, was a member of the S.C. Legislature in 1919-2020, and when he ran for the Senate in 1920, this was the result: “The editor was a candidate for the State Senate in the next fall’s election but was defeated ostensibly because he had supported the nineteenth amendment (woman suffrage) which the General Assembly had ratified that year.”(from The Editors of The Edgefield Advertiserby Eleanor Mims [Hanson], 1930, published in book form by The Advertiser Press in 1980.)

It was said, according to family legend, that on the day of the vote, a yellow pudding was served as dessert in the editor’s household when the family sat for dinner, yellow being one color representative of the Suffrage movement.

One Response to "100 Years Ago, Women Won Right to Vote"