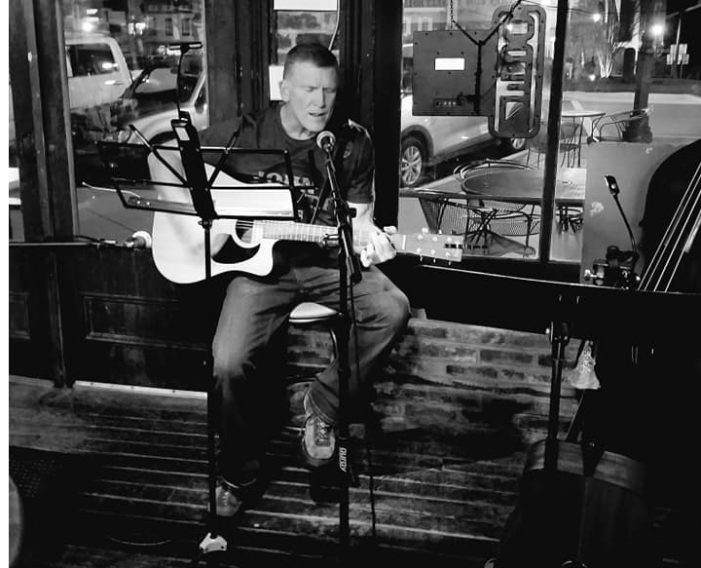 You are telling your age if you know what Green Stamps are and you most likely are a member of AARP. Brooker Strom, master burger chef, got his first guitar from his mother saving Green Stamps and her ordering it from a catalog. For those who are a bit younger, Green Stamps were given shoppers when purchasing groceries. The number given was based on how much money you spent and they could be traded for merchandise.

Brooker’s first guitar came with gut strings which he replaced with Black Diamond steel strings. “I gave that guitar away and could kick myself. I don’t even remember who I gave it to. When you are young you don’t understand the sentimental value of things,” reflected Strom.

Brooker heard Neil Young perform Sugar Mountain on a late-night radio station in Augusta in the early 1970s and decided he would learn to play the song. Up to then he said he had banged around on his cousins Woody and Russell’s guitars when his mom would drop him off at their houses, but really had not learned that much. “Singing in the choir at First Baptist Church was I guess where I really got introduced to music,” said Strom.

Strom’s major musical influences when he started playing was James Taylor, Neil Young and Jim Croce. “Jim Croce was a huge influence on my picking style and the four-finger method came natural over time,” said Strom. While he did write some songs as a teen, he was not happy with them and threw them away. “It sounded like other people’s songs and I never developed my own voice and style,” explained Strom.

Residents in Edgefield County over the years have had ample opportunities to hear Brooker perform. He jumps in and plays for local festivals and other public events. He did note that he misses performing at Edgefield County Acoustic events. “I’m learning a new old 70s song about once a week. It was great to experiment with a song you wouldn’t think of playing acoustically and throw it out to see peoples’ responses,” said Strom. He is considering starting to write his own material and when he does, his listeners will be blessed again.

One Response to "A Lifelong Musical Journey Blesses Edgefield County"