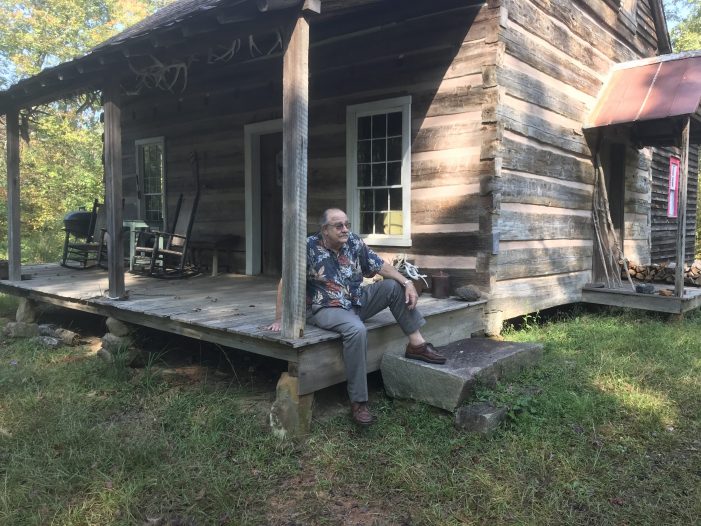 John Kemp enjoys some time on the porch of his log house.

John Kemp wanted a hewn log house starting in the early 1970s. “I had an itch and I just scratched it,” noted Kemp referring to the project of moving a log house to his family property almost forty years ago. Kemp said he knew where a half dozen or so log houses were in the area in 1983. Each time he approached a log house owner he said they either had a strong emotional or family attachments or the roof had not been kept in repair, resulting in damage to the logs.

Kemp eventually found a log house he could buy in Abbeville County on Lake Succession. The log house was like most that were built during the period measuring seventeen by twenty-seven feet with a half story on top. The gentleman Kemp purchased the house from was born in the home and was a fellow antique dealer.

The quickest part of the process was disassembling the house which took Kemp and some friends and family three days. Kemp used a bulldozer and a boom to load the logs on a Billy Prince’s trailer. Each log was tagged with different colors and he drew the plans of the house to help with its reassembly.

Kemp explained the house had been bastardized a bit. Some rooms had been added to the structure. Those rooms were damaged by power post beetles and were left on the original site. The front door had been moved, a wall added to divide the one room, and the stairway was also relocated. “I’m a stickler for authenticity,” stated Kemp. He moved the front door and stairway to their original positions and removed the interior wall that was added.

In order to get the log house as close to its original design, Kemp used logs salvaged from other houses built in the early 1800s that were beyond repair. He placed a conventional roof on the house and used the original roof’s rafters for the front porch. Kemp hewed the 12” x 12” back seal from a tree on his property to replace the original that was damaged.

Kemp explained there is a difference between a log cabin and a log house; the latter was typically larger and built to last. A log house with a roof kept in repair will last many years. Kemp’s log house is built with the hearts of old growth longleaf pines with the exception of the front seal that is yellow popular. “I know every stone and timber,” assured Kemp.

Kemp explained that the gaps between the logs were chinked by the women and children back in day. Chinking was pretty much an annual affair and involved mixing mud, straw, twigs, and rocks and placing the mixture around slab from saw mills placed between the logs. A synthetic material which lasts much longer was used on his house.

​Using the plans he drew and removing the logs off the trailer in reverse order, the rebuilding process took Kemp and his friends seventeen weeks to complete. He shared that Haywood Butler was a good friend and spent a tremendous amount of time on the project. The original chimney was not moved because he did not like the stones, but they did find a stone dated 1838 on the original chimney, making the house 182 years old.

​Kemp said he spent three weeks of his life building the new chimney for the log house. The finishing touches included using some timber from the Presbyterian Church in Edgefield that had burned while he was a volunteer on the fire department on the front porch. He also used some 2 x 6 hand dressed heart pine from an old house in Edgefield for flooring and walls and took the original interior boards to the creek and removed the whitewash by scrubbing them with Ajax. He finished the story of the project by saying they knew how to build back then. Pointing the top of a back corner of the log house, Kemp said there is a single king pin there that holds the house together. ​

Kemp confessed he does not know why he does most things, but he knows why he tackled this project. While looking at a photo album that was made of the project he mused over the number of scouts and school children who have visited the log house and learned a bit about history. He reminisced about the friends who helped and the friends who have enjoyed the beautiful setting. He remembered the first night he and his wife Virginia spent the night there and she was stung by a scorpion. He recalled the night it was nine degrees. He recollected all the times family has gathered there for food, fishing, hunting, and fellowship. John Kemp summed it up, “It’s been a blessing; life has been a blessing.”        Arthur Northrop

Log House, a Scratched Itch added by admin on October 28, 2020
View all posts by admin →