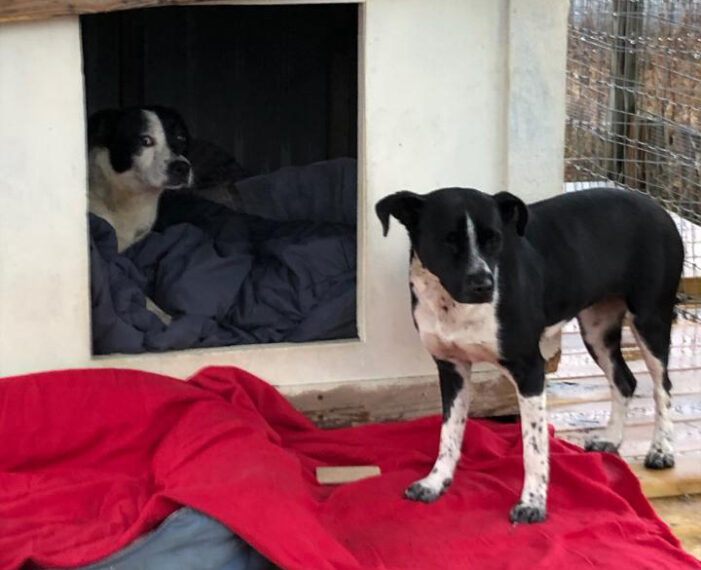 Lola (in the house) and DD adjust to five-star accommodations, a steady food supply, and training their new humans.

The Author of this story asks that if the reader knows of a rescue story to share, please email him at Arthur@edgefieldadvertiser.com

On Christmas Eve there was a post on the Edgefield Johnston Trenton Facebook page that Jessica Parker, a corporal with the Town of Johnston Police Department, was looking for a dog house, because she knew the dog recently had puppies. Arlene had loaned an Igloo doghouse to a friend who rescued a dog and asked her friend to bring it to her house.

Arlene then asked her city council person, Thomas Holmes, a man who obviously can’t say no to a constituent, to come over with his truck and move the dog house. Arlene, Jessica, and Thomas took the doghouse to the abandoned burned out home where Jessica had followed Mama Dog and the puppies were located.

This is where Anne Widell, English teacher extraordinaire at Strom Thurmond and dog lover got in on the action. Anne keeps Arlene’s goats because Arlene lives in the city limits and can’t have goats. (She would if Thomas and the town council would let her, I’m sure) They got some of their goats’ hay from Anne’s for the dog house and recruited Anne for the dog and puppy rescue. The group left some food and water on Christmas day in the dog house hoping to catch the elusive canine mother.

Mama Dog is pretty smart and had evaded capture from Arlene, Jessica Parker, Anne Widell, and Erika Raines during the past year. On Christmas day and the day after none of the group heard the puppies. Arlene said she kept seeing mama dog at the burned-out house and would go there with a bag of treats.

“In a high-pitched voice, I would say “Who’s a pretty girl? Where’s a pretty girl,” explained Arlene. She said Mama dog would appear from under the burned-out house and she tossed her treats. Arlene said the dog would get closer and closer but would not let her catch her. Then Daughter Dog appeared on the scene. Daughter Dog they discovered was the only surviving pup from Mama Dog’s previous litter.

​Finally, a few days later, Arlene, Jessica, Anne, and Anne’s daughter Kelly decided it was time to act. Jessica decided to attach her phone to the capture pole to recon the situation. After locating the pups, Anne crawled under the house which was low to the ground. “The puppies were in between two floor joist and you couldn’t even bend your elbows. You could go straight in and back out straight, but you had no room to move,” explained Arlene. The group decided to dig a tunnel under the house and that job fell to Kelly who dug the tunnel with a hoe a bit at a time.

​After getting to the pups, they discovered Mama Dog and dug a hole for their comfort and safety and made it impossible to get them out by hand. The group brainstormed and decided to attached a cable to a sack and as one of them backed out, the others would pull the sack with the pups in it.

After Anne’s trip from under the house, there were four priceless puppies whose eyes had not opened. Mission accomplished – NOT. After exiting from the house Anne said she had to return. Much to Arlene’s and the others surprise, Anne said there were four more to be rescued. “I was expecting one or two maybe because Mama Dog was extremely skinny. I really did not have hope of finding any live puppies,” noted Arlene.

Puppies rescued – now to capture the adults. Jessica borrowed a Have A Heart trap from the county’s canine patrol. Over the next few days Daughter Dog was captured in the trap and the sly Mama Dog was lured with hotdogs into a shed leading to her capture.

So here is where the saga stands. The eight puppies were taken to a dog rescue by Billie Jo Corcoran (Yet another accomplice) The dog rescueplaced the pups who are being fed by bottle in foster care. They now reside in Greenville.

Mama Dog, renamed Lola and Daughter Dog now answering to DD, are in the care of yet another player in this heat warming story. Erika Raines has both the pooches and her and her husband are socializing the canines.

Much progress has been made in the adult dogs warming up to humans. Arlene said she recently pet Lola in her dog house. “They are the type of dogs when their tails wag the whole body moves,” laughed Arlene.

The plans are to have the dogs spayed when they gain some weight and they are treated for their heartworms. In addition, DD has dystrophia which is an eye disorder. Since their capture the good folks at the Johnston Animal Hospital have helped the crew with the dogs. The cost for the eye surgery, heartworm treatment and spaying will run around $1,500. Donations can be made on a GoFundMe page or drop them off with Allison at Maxwell and Halford Drug Store. (I bet Erika will take dogfood and treats donations too.)

So, there you have it, a Doggy Christmas story of the ages. Arlene is writer and she is probably working on the movie script as you read this. The story line – great things can be accomplished when people care and work together.