Property Rights and “the Pursuit of Happines” Collide 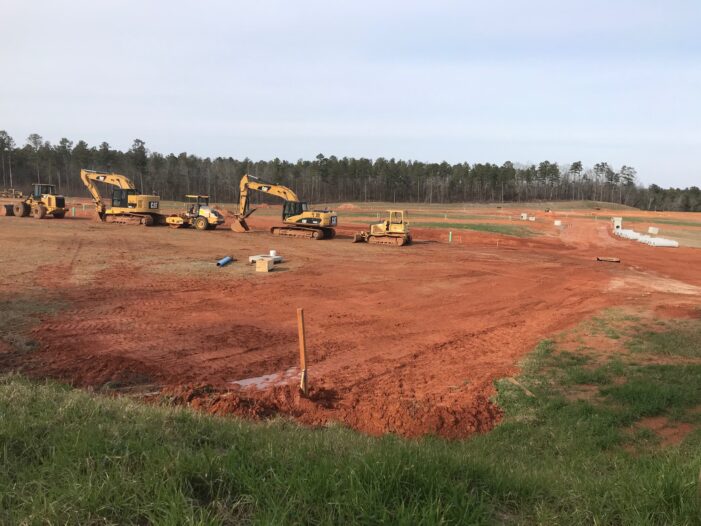 Construction is underway for Tavern Hill, a subdivision marketed as a “rural preservation community.” The development is off Sweetwater Road on Stephens Road and will have 212 lots of various sizes with an average lot size of 11,725 square-feet. The development will have 40% green space, buffers, and pervious area providing an overall density of .48 acres per lot.

Megan Pearson is one of several concerned citizens who has followed the development of Edgefield County’s Comprehensive Plan and is leading a petition drive to change it. Pearson contends that high density development is mainly benefiting developers and will hurt the people who already live in the county.

Tommy Paradise, Edgefield County Administrator, was asked for projections of increases in tax revenue and expenditures like roads, public safety, schools, fire protection, government, infrastructure, etc. due toresidential growth. Paradise responded, “That is not information that we currently have available.”

Pearson believes that high density subdivisions will increase taxes for roads, government, infrastructure, school buildings and operations, fire protection, and public safety for county residents. Pearson makes the case unless the changes are made to the Comprehensive Plan as stated in the petition, residents have no recourse. “There’s no legal way to fight any of the high-density development unless the Comprehensive Plan is changed,” said Pearson.

Cooper thinks work should be done with the objective of promoting what makes Edgefield County special to industry and small businesses as well as new residents who will inevitably come here. “One or two large companies who catch what makes us special, and want to make the investment to bring our rich history into the 21st century, could make the difference for all of us,” stated Cooper.

Cooper maintains that the Comprehensive Plan and its overlay districts (Overlay Zones according to the MASC (Municipalities Association of South Carolina) protects the rural feel of the county. He said building houses in high density developments will look fine if they are 300 feet from the road and the homes’ garages are not facing the highway. According to MASC an overlay zone imposes a set of requirements or relaxes a set of requirements imposed by the underlying zoning district when there is a special public interest in a particular geographic area that does not coincide with the underlying zone boundaries. Cooper says the end result of the county keeping its rural feel can be reached through the overlay districts (Overlay Zones).

For Cooper, the changes that were made to the Comprehensive Plan boil down to a lot of forces Edgefield County does not control. Cooper contends growth in the region and the demographics of people moving from state to state trigger the need for housing. He likens it to the 1950s when people moved here for SRS. “There was a shortage of housing and people didn’t like it then, but you couldn’t stop the forces of the movement of people,” said Cooper.

Cooper believes making the changes to the Comprehensive Plan protected the property rights of those who own land and protected the free market which will allow the county to grow. He thinks growth will be positive for the community.

Cooper shared he moved three times in the Washington, DC area due to encroaching development. He believes the county government should allow the market to control development because America was founded on life, liberty, and property. “Unless you buy the land around you, you can’t control everything that happens,” noted Cooper.

Cooper views himself as a steward and believes in the highest and best use of land. “Not all land is created equal. I don’t think it is wise to lock everything into large lots. I’m not opposed to people purchasing land so they control it, but as a government official, that’s not my role,” concludedCooper.

Campbell thinks in some areas doubling the number of homes you can place on a small lot allows too much density which can lead to issues for all the county’s residents. “I just think we can do better. I support what the petition is asking for,” shared Campbell.

Pearson understands the motivation of some land owners to cash in on their land. “I understand people taking money they’ve never seen,” reflected Pearson. She hopes she would make the right decision if the opportunity presented itself to her. She shared she knew a person who was offered a large amount of money to allow a solar farm to be built on his property and the landowner decided not to sell.

“People think growth is good, but not all growth is good. They think these subdivisions are going to bring so many good things to the county,but they are not doing anything but benefiting a developer,” said Pearson.Pearson said anyone wanting more information about the petition can reach her at meganpearson33@yahoo.com or 803.480.9735 or they can contact Linda Anderson at johnnyfanderson@bellsouth.net or 803.480.9735.

Property Rights and “the Pursuit of Happines” Collide added by admin on January 16, 2021
View all posts by admin →

8 Responses to "Property Rights and “the Pursuit of Happines” Collide"