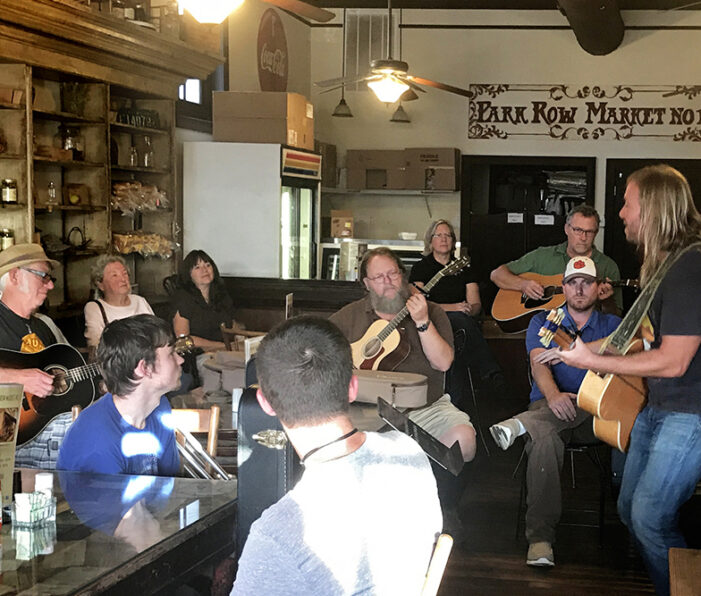 Fred Engler of Abbeville performing as ECA’s first guest musician and at the group’s first meeting on October 2, 2017.

Three or four years ago, a group of around ten guitar players were to meet at a hotdog restaurant in Edgefield. There was a miscommunication and the owner was not there to let us in. I frantically ran around the square to find an alternative venue.

There enters Jody, proprietor of Park Row. At the last moment he graciously offered up his restaurant as a place for us to play. For the next three years or so, on the first Monday of each month, the group met at Jody’s. Because of Jody’s support, that group of musicians that met monthly, planted the seed to make music in Edgefield County. Thanks, from all of us, Jody.

The format we used included a guest musician who would do a short set at the start of the night. Next, anyone who wanted to play a song or two got the opportunity to share. Ending the evening were jam sessions where people made music together. At times there was a group jamming inside and another outside on the sidewalk.

Over the years, ECA (Edgefield County Acoustic) had over 275 different people attend and well over forty of them were musicians. There was a group of regulars and then there were folks who attended only once in a while. The crowd at Jody’s got up to over sixty people on a regular basis. (That’s tight in Park Row)

ECA also grew in some other ways. Our members have been tapped to play for local economic development organizations, we had a series of songwriting workshops, and provided talent for community and school events.

Recently ECA musicians were asked to donate guitars and music items for Game Changers. Game changers is a residential home for recovering addicts in neighboring McCormick County. The men at Game Changers are getting equipment, lessons and performances from ECA members.

ECA has operated without a formal leadership structure. About six of us have “group thinked” decisions and made changes when needed. During the pandemic (Which hurt performers all over our country – financially or emotionally or both), we have decided to make some changes to our format and to grow as a music community.

ECA will still meet at Jody’s on the first Monday of each month. We will send out details about the changes in the format next month to our email list. But we also plan to grow ECA by having “jam” sessions at different local merchants on a regular basis. We will let you know about that too.

ECA draws musicians (and guests) from across the CSRA. While these people differ in musical taste and skill levels and a host of other things, they do share the love of making and listening to live music. ECA is a great example of how our county is enriched by the arts. We hope the musical seeds ECA is planting will grow so that Edgefield County becomes known as a hub and venue for live music. See you soon! A. Northrop