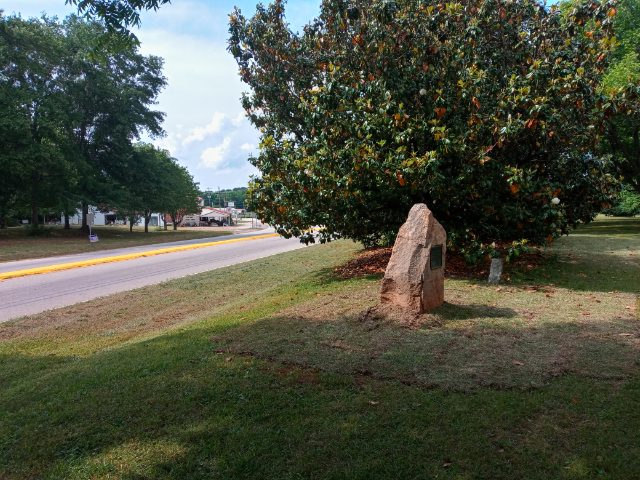 Monument as seen in new site, in front of the Pine House.

A marker commemorating the visit of President George Washington to Edgefield County in 1791 has been moved to a new spot directly in front of the Pine House where visitors can have easier access to it.

First erected by the Trenton chapter of the National Society of the Daughters of the American Revolution in the middle of the Pine House intersection in 1927, the marker had become inaccessible as traffic increased over time, and had recently been knocked over in a vehicle accident.  The Edgefield County Historical Society assisted the Trenton DAR chapter in moving the 10,000-pound granite marker, which was accomplished on May 16.  Alex Hamilton of Hamilton Paving did the actual move.

The Edgefield County Historical Society, with the participation of the Trenton DAR, sponsored a brief commemoration ceremony on Saturday, May 21, which was the exact 231st anniversary of Washington’s visit. Society Historian Bettis Rainsford gave an overview of the Pine House history and the President’s visit.  Attendees included George Tillman Swearingen, the great-great-great-grandson of Captain VanSwearingen, who was Washington’s host at “the Piney Woods House,” as it was then known.  Washington left Augusta on the morning of May 21 and rode twenty miles to the Piney Woods House where he had breakfast.  He then departed for Columbia, stopping at the Odom home near Monetta to spend the night before traveling on to Columbia the next day.

Marker Commemorating Washington’s added by admin on May 31, 2022
View all posts by admin →

One Response to "Marker Commemorating Washington’s"