An Entire Family of Patriots 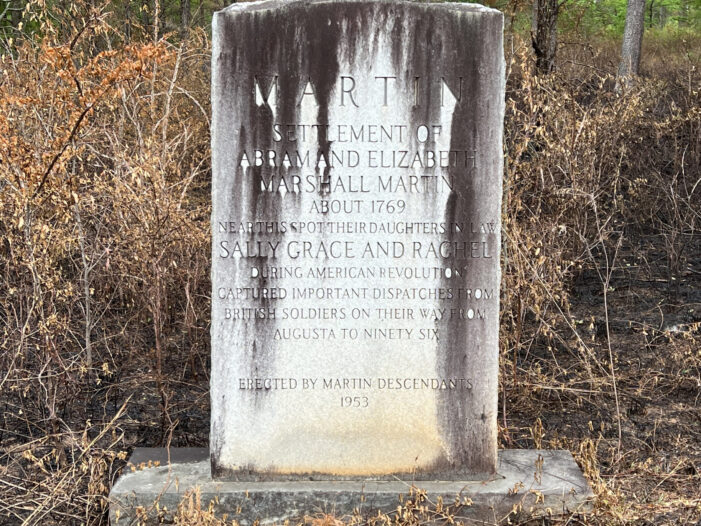 Before returning to South Carolina, if anyone had asked me where most Revolutionary War battles were fought, I would have replied “New England.”

For the first three years of the American Revolutionary War, which began in April 1775, most of the major battles took place in the Northern colonies. After the French entered the war on the side of the Americans in 1778, the British shifted their focus to a campaign in the South, where they hoped to enlist the support of American colonists still loyal to Great Britain and the British monarchy. The campaign initially was successful, as the British seized the key ports of Savannah (December 1778), and Charleston (May 1780). However, the tide began to turn for the Americans in the fall of 1780, when a Patriot militia defeated a Loyalist militia at the Battle of Kings Mountain. (“Battle of Guilford”)

The fact is that more battles were fought in South Carolina (over200) than anywhere else in the U.S. (we will not quibble over what constitutes a “battle” versus a “skirmish”).  In many places in the “backcountry,” the conflicts pitted neighbors against one another. Patriots who disagreed with paying taxes to offset British war debts, and Loyalists who still looked upon England as their sovereign country, engaged in open hostilities. One of the staunchest families supporting colonial independence was the “Fighting Martins” from the Ninety Six District.

“The Martins came of English stock, but moved to Ireland, where they multiplied and prospered, owning large, landed estates near Galway. The law of primogeniture forced many of the younger sons to seek homes in other places and countries” (Polk pp. 17-18). Among these was Abraham Martin (1644-1711) who was born in Galway, Ireland and immigrated to Virginia where he married Rebecca Bell in 1674. They had five sons and one daughter. The eldest son, John (1685-1756),married Elizabeth Letitia Lewis and they lived in Caroline County, Virginia. John and Elizabeth had eight sons and five daughters, although three children died in infancy. Their youngest son was Abram Martin (1716-1773). Abram was a Captain in the colonial militia of Virginia, serving under Colonel George Washington, and participated in the defeat of General Braddock at Fort Duquesne during the French and Indian War.Abram was commissioned by the King of England to survey a part of the Southern colonies and for this service, he was given a tract of land in what is now Edgefield County (Jacobs 36).

In 1744, Abram married Elizabeth (Betty) Marshall (1727-1797), whose nephew was John Marshall, the 4th Chief Justice of the United States. They had eight sons and one daughter and lived in Carolina County, VA prior to moving to their new grant in South Carolina in 1769. They operated a farm and a store in the community that became known as Martintown. Eventually, “the path to Augusta” which led through Martintown came to be designated “the Martintown Road,” the name by which it is known today (Buckner 25). All their sons served in the American Revolution, as did daughter Lettie’s husband, Captain Edward Wade, who fell with his commander, Major General Richard Montgomery, at the Battle of Quebec (Green & Green341).

Seven of the sons served as officers in the Continental Army. Matthew, the youngest son, was only 12 years old at the beginning of the war. He remained with his mother until Cornwallis overran South Carolina when Matt was about sixteenyears old. Matt attempted to reach the camp of his brothers but was captured and held prisoner. At the Battle of King’s Mountain, he was put into the Loyalist line of battle to fight against his brothers. After the surrender, he was found wounded on the battlefield. Matt entered service in 1780 and served under General Nathaniel Greene at the Battle of Guilford Courthouse. Of the eight sons who fought in the war, all survived except the eldest son: William Martin was a Captain in the artillery and served “with distinguished bravery” at the sieges of Savannah and Charleston and was killed at the siege of Augusta (Jacobs36). William had married Grace Waring in 1772 when she was just 14 years old (he was 27). The fifth Martin son, Barkley (also Barclay), married Rachel Clay in 1780. Rachel Clay’s sister, Sally, married the youngest son Matthew in 1787. Rachel and Sally Clay were first cousins to Henry Clay, “The Great Compromiser” from Kentucky (Green & Green 341-342).

In 1773, Abram Martin was killed by native Americans while on a surveying trip in Wilkes County, Georgia. His widow, Betty, lived in their house located on the Martintown road to Augusta. During the Revolutionary War, this road was a thoroughfare widely traveled by British soldiers, Loyalists, and Patriots. As such, the Martin home was frequently visited. The Martin women, left alone while their husbands were away fighting, were no less zealous and courageous than the men.Many South Carolinians are familiar with the story of the Revolutionary War Martin heroines. Here is a summary:

In May 1781, the Martin household, at the time all women, received word that a courier guarded by two British soldiers, would be passing with important dispatches for Colonel Crugerwho held the fort at Ninety Six. Grace Waring Martin, widow of Captain William Martin, and Rachel Clay Martin, wife of Barkley Martin who was serving with General Greene, took action. Determined to intercept the courier, the two women dressed in their husbands’ clothes and armed with contraband firearms, set off on their mission.

They stationed themselves at a protected bend in the road where they knew the escort would pass. Darkness was about to fall when they heard the approaching horsemen. At the strategic moment, they sprang from their hidden position and, brandishing their firearms, Grace Martin demanded the papers in the deepest voice she could conjure. The soldiers, taken by surprise, acceded to their demands. The wives, having accomplished the purpose, paroled the enemy,and disappeared through the woods, taking ashortcut back to the house.

When they arrived home and reported their success, a third daughter-in-law, Sally Clay Martin, wife of young Matthew, claimed the privilege of delivering the dispatches to General Greene. She rode alone on an old blind pony and arrived at Ninety Six at midnight. Meanwhile, Grace and Rachel had just enough time to change back into their regular clothing before the British men arrived at the homestead, asking for food and shelter. The elder Mrs. Martin asked them, in all innocence, why they were returning so soon after having but recently passed the house. The men showed her their paroles telling her of the two rebel men armed with rifles who had appeared so unexpectedly the British could not defend themselves. The men stayed the night and went their way the next morning, never the wiser as to who had waylaid them the previous night.They departed the next morning ignorant of the fact that the two rebel youths were none other than two of their hostesses for the night. (Green & Green 336-341) and (Buckner 56)

Obviously, Mrs. Martin’s sons looked for the same strength in their wives that they had always seen in their mother:Elizabeth Marshall Martin was as tough and patriotic as her sons. She encouraged her boys in their zeal for independence. “Fight till death if you must, but never let your country be dishonored. If I were a man, I would go with you!” When questioned by a British officer about the number of sons she had, she answered briefly, “Eight.” “Where are they?” he asked. “Seven are in the service of their county,” she proudly stated. “Really, Madam, you have enough of them,” he commented sarcastically. “No, sir,” she retorted. “I would that I had fifty!” (Buckner 56). Another story of Betty Martin was that when the British were in possession of the fort at Ninety Six, an English officer rode out to the Martin home one day and asked the old lady, who sat with her daughter-in-law Grace, “Didn’t you have a son in the Army at Augusta?” “I did,” replied the aged mother, scarcely able to restrain her tears. “Well, I saw his damned head shot off,” replied the officer, with a malicious grin. If he anticipated any pleasure in seeing the agony of a wife and a mother he must have been chagrined, as the only reply of the mother was, “He could not have died in a better cause” (Green & Green 342). John Chapman summed it up perfectly when he stated in his book: “The wives of these men were about as good and true soldiers as their husbands” (151).

There is a familiar granite monument at the intersection of Martintown Road and Lick Fork Road, erected by the Martin descendants in 1953 to commemorate the heroic deed of Grace, Sally, and Rachel. But many overlook the reverse sideinscription:

​The Martin house was located on what is now Lick Fork Rd, about .5 mile from the monument placed by the Martin descendants. The S.C. Department of Archives and History maintains the Colonial Land Grants and Colonial Plats for this property in the names of Abram, Abraham, and Betty Martinfrom 1770-1772 (available at https://www.archivesindex.sc.gov/). The property transferred title at least six times before being purchased by Sumter National Forest in 1939. The remnants of two chimneys, some foundation stones, and a burial area with one memorial are all that remain. The stone memorial includes the name MARTIN and an inscription that reads “In memory of Abram and Elizabeth Marshall Martin and their son.” On the reverse side is inscribed “Col. JAMES MARTIN. Patriot & Soldier in the War of American Independence.” While Barkley and Matt Martin,along with their spouses Rachel and Sally, are buried in the Martin Cemetery in Bedford County, TN, it is possible the other sons, John, George, Edmund, and Marshall, are buried at thisMartin home place. If any reader has burial information regarding these early American heroes, please contact me at marianbland23@gmail.com.

Chapman, John A. History of Edgefield County from the Earliest Settlements to 1897. Elbert H. Aull, 1897.

Green, Harry Clinton, and Mary Wolcott Green. The Pioneer Mothers of America: A Record of the More Notable Women of the Early Days of the Country, and Particularly of the Colonial and Revolutionary Periods. G.P. Putnam’s Sons, 1912. Vol 2. https://library.si.edu/digital-library/book/pioneermothersof21912gree.

Hardy, Stella Pickett. “The Martin Family,” Colonial Families of the Southern States of America: A History and Genealogy of Colonial Families Who Settled in The Colonies Prior To The Revolution. Tobias A. Wright, 1911. pp. 366-374.

An Entire Family of Patriots added by admin on June 27, 2022
View all posts by admin →

One Response to "An Entire Family of Patriots"