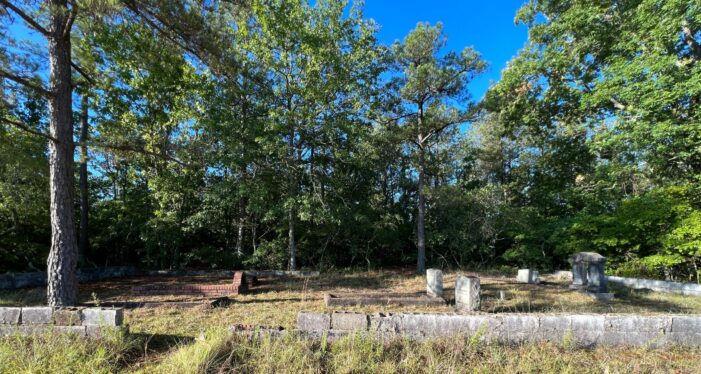 This is the tenth article in the series on old Ninety-SixDistrict cemeteries and family genealogy. Researching the Nicholson family history led me to three different cemeteries in Edgefield County. According to familysearch.org, this line began with John Nicholson (1620-1691) and the parish records from Cumbria, England. His grandson William Nicholson (1669-1728) was the first to settle in the U.S., moving with his wife Alice and at least some of their 11 children to Virginia (his will was probated 17 May 1728 in Norfolk County, VA). William’s son George moved to North Carolina and passed away in 1780. George’s son Wright Nicholson (1739-1808) moved to Edgefield, SC. According to South Carolina Department of Archives and History, Wright Nicholson was granted 190 acres on the South Side of the Saluda River, 16 September 1784, and another 830 acres on Penn Creek, 26January 1789.

Wright Nicholson was married twice: first to Frances Deloatch with whom he had five children, and then to Mary Douglass with whom he had another five children. It appears from his will, dated 23 October 1807, and other records that the entire family was close, and that Mary considered all tenchildren part of her family. Wright left 200 acres on Rocky Creek to his son David, and he left the tract of land on which he currently lived to his son Wright Jr., but all ten children wereincluded in his will. Mary Douglass Nicholson (1749-1825) appears to have been a remarkable woman: not only did she welcome ten children, but Wright’s fifth child, Elizabeth, married Thomas Adams, and they had five children. Elizabeth and Thomas died when their children were very young and it was Mary, their step-grandmother, who raised them!

In 1944, descendants of Wright Nicholson gathered for a monument dedication ceremony. The inscription on hismonument reads:

According to Historical Data of the Nicholson-Adams, and Allied Families, compiled by Mrs. J. L. Mims for the dedication ceremony, Wright’s youngest son Wright Jr., his brother David,and their families moved to western Tennessee in 1829. This source states Wright Jr. was “well-educated, a teacher and a great reader.” Wright Jr.’s daughter, America Texanna, attended Mary Sharp College, “the first women’s college in the United States to offer degrees equivalent to those offered at men’s colleges” (https://tennesseeencyclopedia.net/entries/mary-sharp-college/).

Wright senior’s son, Shemuel (1772-1847), married Lydia Oliphant (1779-1846). Shemuel was a devoted member of Little Stevens Creek Baptist Church, and built the Nicholson ancestral family home called “Elmwood.” Shemuel and Lydia had fivechildren, including Dr. John Oliphant Nicholson (1808-1851). John married Elizabeth Julia Threewitts (1812-1898). Elizabeth is the granddaughter of Emily Geiger Threewitts, heroine of the Revolutionary War. (Emily Geiger had volunteered to carry a letter from General Greene to General Sumter, and upon being intercepted by British scouts, she ate the message. When released, she found her way to General Sumter and delivered the information verbally). John and Elizabeth had eight children, including Albert Rhett Nicholson (1843-1916).

When he was 18, Albert Nicholson enlisted with the Confederate army, along with his brother Benjamin, age 20.  Both were assigned to the Hampton Legion, where Benjamin rose to the rank of Colonel. Albert served in Gen. Martin Gary’s Company as one of the General’s couriers (fold3.com military records and Albert’s obituary). The two brothers also married two sisters: Albert married Sarah Winn Hughes (1849-1915) and Benjamin married Elizabeth Juliet Hughes (1844-1932). Albert became superintendent of education for Edgefield County in 1896, a position he served in until 1908.

Wright Nicholson Sr., his son Shemuel, his grandson Dr. John Nicholson, as well as their wives and additional family members, are buried in the Old Nicholson Family Cemetery(identified on findagrave.com as the “Nicholson-Norris Cemetery”), located off Meeting Street on Elmwood Road. Albert Rhett Nicholson, his brother Benjamin, their wives, and many of their descendants are buried in the “Blocker Family Cemetery,” located off Hwy 25, just before Pleasant Lane Rd.(These two Nicholson cemeteries are about 4.5 miles apart)

The third Nicholson cemetery is a beautiful slice of history located on the grounds of Bettis Academy, where Alfred Nicholson (1861-1945) and his family rest peacefully. The genealogy website Familysearch.org states that when AlbertNicholson was 18, presumably before signing up with the CSA, he fathered a son, Alfred, with Louise Braudenaux, who was 21. (This is also supported by Alfred’s death certificate which lists Louise Braudenaux as his mother, although his father’s name is blank).

Alfred Nicholson was born and raised on a plantation andwas identified early on as an exemplary individual with outstanding potential. He was selected by Pleasant Grove Baptist Church to be groomed as an instructor and leader for the new Bettis Academy, established by Reverend Alexander Bettisin 1881. Alfred was sent to the Schofield Normal and Industrial School in Aiken, founded by Martha Schofield, a Pennsylvania Quaker. The school was established for freed slaves in 1871 and served as a center for black education in S.C. for more than seventy years. Both Alfred Nicholson and fellow educator Hampton Matthias were teachers at the Bettis School. Desiringadditional education, Matthias taught while Nicholson attended Atlanta University. Then, when Nicholson’s course work was done for the year, they switched, and Matthias attended Atlanta University.

Bettis Academy had four presidents throughout its history, and no one served as long as Alfred Nicholson, who held the position for 45 years. According to the Edgefield County Historical Society website’s list of Other Famous Edgefieldians, Alfred Nicholson was “very successful in managing the school and particularly in raising funds for operations. Like [Reverend] Bettis, he was an ‘accommodationist’ in race relations and was extremely successful in gaining support for his school and his people.” In his 13th year as president of the school, Alfred Nicholson authored a wonderful book titled, Brief Sketch of the Life and Labors of Rev. Alexander Bettis. Also an Account of the Founding and Development of the Bettis Academy (1913),detailing the impressive history of Reverend Bettis, his work to establish the Academy, and the early difficulties and successes of the Academy.

My research regarding Alfred Nicholson’s family cemetery led me to Biddle Hall Museum, the former home economics building of Bettis Academy. I spent some time with two wonderful ladies, Shirley Tillman and Jackie Simpkins, learning the very important role the school served. Bettis Academy was established for African American education in grades 1-12. When the school closed in 1952, there were 14 buildings on 350 acres. A self-sustaining entity, the campus included a girls’ dormitory, a boys’ dormitory, a science building, ice house, gymnasium, cannery, barn, grocery store, print shop, hospital, and more. On 20 May 1998, Bettis Academy was added to the National Register of Historic Places. Alfred Nicholson’s family cemetery can be found directly across Nicholson Road from Biddle Hall Museum, off the dirt road “cut-through” that connects Nicholson and Bettis Academy Roads.

The Family that Helped Bettis Academy Succeed added by admin on August 12, 2022
View all posts by admin →

One Response to "The Family that Helped Bettis Academy Succeed"