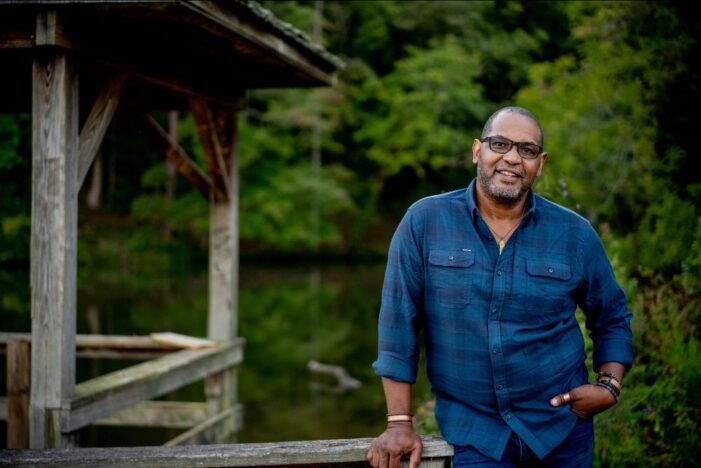 Release from Clemson’s College of Agriculture

Clemson Alumni Distinguished Professor of Wildlife Ecology J. Drew Lanham is a man of many talents and titles, but he often refers to himself simply as a “wondering wanderer” or “man in love with nature.”

Now he can officially add “genius” to the list … not that he plans on calling himself that.

On Wednesday, October 14, Lanham was announced by the John D. and Catherine T. MacArthur Foundation as one of its 2022 MacArthur Fellows, which have come to be known by their own descriptive title: “genius grants.”

“I’ll dismiss that quickly,” Lanham said with a laugh of being dubbed a genius. “I think the genius of it is really in the Foundation having the vision to see that you can give license and liberty to thinking in a way that is truly saying to a group of people, ‘Look, you’re doing some unique work here that moves the world’s needle toward some better place. We want to support you in that and do so in a way that can be significant and life-changing and allow you to focus on that for a significant amount of time.’ So, that’s the real genius to me: that the MacArthur Foundation sees fit to fund dreams.”

An investment in originality

The Fellowship is awarded to talented individuals in a variety of fields who have shown exceptional originality in and dedication to their creative pursuits. Fellows receive $800,000 stipends bestowed, quarterly over five years, with no conditions; recipients may use the money as they see fit.

Nominated anonymously by leaders in their respective fields and considered by an anonymous selection committee, recipients learn of their selection only when they receive a call from the MacArthur Foundation just before the public announcement.

“When I got the congratulatory call, I was both speechless and, I think, a babbling idiot,” Lanham joked. “But it’s a great honor. For a while I thought of it almost as an intellectual lottery, but really what it is, is creative liberation. It allows me to continue the work that I’ve been doing, but now without so much explanation as to why that I do the work that I do.”

Although nominees are reviewed for their achievements, the fellowship is not a lifetime achievement award, but rather an investment in a person’s originality, insight and potential. Indeed, the purpose of the MacArthur Fellows Program is to enable recipients to exercise their own creative instincts for the benefit of human society.

“In addition to recognizing and supporting exceptional creativity, we hope that the Fellowship will inspire people to pursue their own creative interests,” said Kristen Mack, Vice President, Communications, Fellows, and Partnerships.

Lanham is an ornithologist, naturalist, writer and poet combining conservation science with personal, historical and cultural narratives of nature. His research and teaching focuses on the impacts of forest management on birds and other wildlife.

“Drew stands out among our faculty, not only because of his achievements and recognition, or his extensive knowledge and experience, but because he is one of those rare individuals who leads from his heart,” said Keith Belli, dean of Clemson’s College of Agriculture, Forestry and Life Sciences (CAFLS). “His passion for his craft and his beliefs is special. I am very honored to call him a colleague and proud to have him as member of the CAFLS Family.”

The Poet Laureate of Edgefield County, from where he hails, Lanham brings his ecological knowledge as well as his perspective as a Black man living in the South to bear on his work as a storyteller, poet and passionate advocate for birdwatching, outdoor recreation and environmental conservation and stewardship. Lanham is also an affiliate faculty member in the Department of English in Clemson’s College of Architecture, Arts and Humanities (CAAH).

“One aspect of Drew’s genius is that he embodies the understanding that our fields of inquiry are interconnected and interdependent,” said Nicholas Vazsonyi, dean of CAAH. “Whatever academic discipline we pursue, being able to communicate it in writing brings it alive and to the public. That is the most powerful part of Drew’s gift to us all.”

In a 2013 essay, Lanham shared “9 Rules for Black Birdwatchers” based on his own experiences with veiled threats and armed passersby while in the field. He also provides specific ways to bring social justice principles into conservation work. (Copyright: John D. and Catherine T. MacArthur Foundation)

In his 2016 book, “The Home Place: Memoirs of a Colored Man’s Love Affair with Nature,” Lanham traces his love of birds and nature back to his family’s small farm in rural Edgefield, South Carolina. His lyrical descriptions of childhood explorations around the farm are a hallmark of Lanham’s conservation ethos: the head to heart connection.

Lanham believes that the combination of scientific facts and emotional connections to nature can more effectively encourage conservation action. A critical component of the head to heart connection is understanding people’s historical and cultural associations with land, a point he illustrates through an affecting account of the painful legacy of slavery attached to the farm.

Like much of the land in the South, before his family owned, shaped and nurtured the farm, slavers forced Lanham’s ancestors to work it. Jim Crow segregation is a frequent topic of his grandmother’s stories of life on the farm, which his family lost after his father’s death. The loss is all too common in a region where policies and practices frequently deprive African American families of their land.

Engagement with the land

Lanham continues to investigate how African Americans’ historical relationship to land influences their present perceptions of nature and its appreciation and stewardship. This work is part of a larger effort to broaden, diversify and sustain engagement with the natural world.

A faculty member in Clemson’s Department of Forestry and Environmental Conservation (FEC), Lanham also writes and speaks powerfully on the implicit and overt racism people of color often face when engaging with their natural surroundings.

“Dr. Lanham, on one hand, is a highly accomplished scientist who has mentored nearly 50 graduate students in (FEC) and published in prestigious scientific journals. And on the other hand, he is a highly accomplished and awarded author and poet, most recently receiving a 2022 Academy of American Poets Laureate Fellowship,” said Todd Petty, professor and FEC department chair.

But Petty said what is truly remarkable about Lanham is his ability to connect science and art through a unique perspective of race.

“No one has done more to demonstrate how racial identity, art and science can interweave in ways that transforms the disciplines of both art and science. It is a truly unique gift, and we are so grateful to have him as a close colleague,” Petty said.

The Poet Laureate of Edgefield County, from where he hails, Lanham brings his ecological knowledge as well as his perspective as a Black man living in the South to bear on his work as a storyteller, poet and passionate advocate for birdwatching, outdoor recreation and environmental conservation and stewardship. (Copyright: John D. and Catherine T. MacArthur Foundation)

In a 2013 essay, Lanham shared “9 Rules for Black Birdwatchers” based on his own experiences with veiled threats and armed passersby while in the field. He also provides specific ways to bring social justice principles into conservation work.

In addition to calling out racism in action, the list includes recommendations such as adopting Harriett Tubman (who used an owl call to identify herself) rather than James Audubon as a bird-loving inspiration and renaming birds that are named after slave owners.

In short, Lanham, who received a BA (1988), an MS (1990) and a Ph.D. (1997) from Clemson University, bridges the arts and sciences to create a new model of conservation and care for nature that includes space for diverse perspectives.

Lanham noted that another effect of the Fellowship, for him personally, was that it was simply validation as an academic that his work was being noticed and appreciated by his peers for its impact and uniqueness.

“Because I have hands and feet in so many different places — in science and art and literature and social activism — all those things don’t always fit in the normal way of thinking about how you evaluate someone’s work. But this sort of cuts through any confusion and says, ‘Your work is worthy,’ and so that means a great deal: to have your work not just seen as worthy where we work, but also beyond it.

“We are a university after all, and ultimately I think the goal should be to affect our world and universe in some bigger way, and this was validation that maybe some of my work has been doing that.”