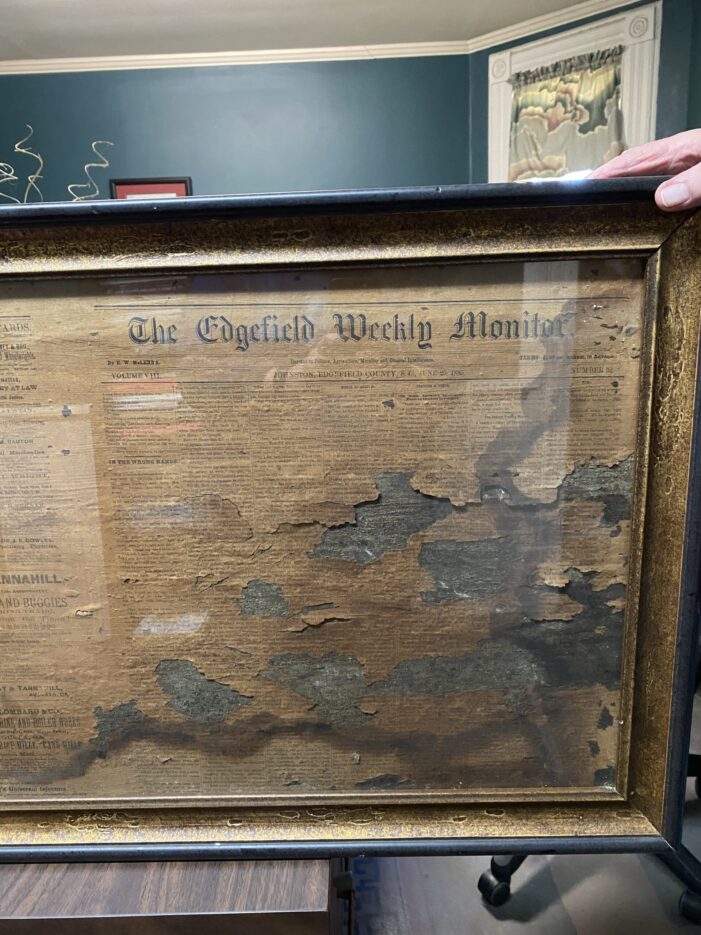 The Photo above shows the Edgefield Weekly Monitor which has been preserved by its finder, Ricky Rhoden, behind glass in a frame.  It was found while Ricky and his uncle, the late Harry Rhoden of Johnston, were doing carpentry work on an old house The Advertiser received the photos from another of Harry Rhoden’s nephews, Andy Livingston.

Johnston’s newspaper history is rich, as we see with the wonderful picture from the Edgefield Weekly Monitor dated June 25th, 1885. While Johnston was founded in 1870, the publisher, E. W. McLenna, elected to use the county’s name in the newspaper title during its run from 1877-1900. The following was found in the Abbeville Press and Banner describing Johnston and Mr. McLenna:

Johnston is a live town all the time and is taking on and in more life all the time. Besides her 19 or 20 stores, five church buildings, academy, etc., there is the Weekly Edgefield Monitor, with a level headed and independent editor, E. W. McLenna, who is also mayor of the town. There will soon be one if not two banks established in this same town.

From Friday morning to Monday, I did not see or hear of a drunken man nor breathe a liquor-tainted atmosphere anywhere I went. … I had and enjoyed the warm-hearted hospitality of the home of my old friend, that same McLenna who still turns out mill stones from the celebrated Cloud’s Creek quarry to grind corn and wheat in this and other states, even as he occasionally grinds up a politician or such like in the Monitor – exceeding fine. (1 Aug 1888)

A few interesting historical statistics: in 1893, Johnston had a population of 778 and west Edgefield County had a population of 49,259. The Edgefield Weekly Monitor had a circulation of 1,008, was 4 pages long, its size was 17 x 24, and cost $1.50 annually (N. W. Ayer & Son’s American Newspaper Annual: containing a Catalogue of American Newspapers, a List of All Newspapers of the United States and Canada, 1893-1894, Volume 1 Page: 705). Here is an example of the writing from the June 1887 Edgefield Weekly Monitor:

Mr. Geo. K. Wright, one of Columbia’s enterprising business men, tired of awaiting the slow progress of the canal, has inaugurated a movement looking to the building of a steam cotton mill on the river bank, so constructed that water can be substituted for steam when the supply is obtained, and the engine then kept as a reserve power. The project is meeting with much favor and the hum of the spindle may yet awaken the catfish from his slumbers in the stagnant pool. This is certainly a move in the (W)right direction.

Armfield Brothers, publishers of the Saluda (S.C.) Standard, recently purchased the job printing plant of W. G. Hazel at Johnston, S.C., and the first and second week of September, will commence publication of the Johnston Herald, a weekly. O. F. Armfield will edit the new paper. (Editor and Publisher, 8 Sept 1923, p. 20)

The Johnston Herald ran from 1923-1947 until J.L. Aull began The Ridge Citizen, which was published from 1947-1982. The last Johnston newspaper was The Citizen-News, published by Edgefield County Communications from 1982-2012.

Historical Newspapers of Johnston added by admin on December 9, 2022
View all posts by admin →

One Response to "Historical Newspapers of Johnston"