A Cannon Fires: a Marker is Unveiled 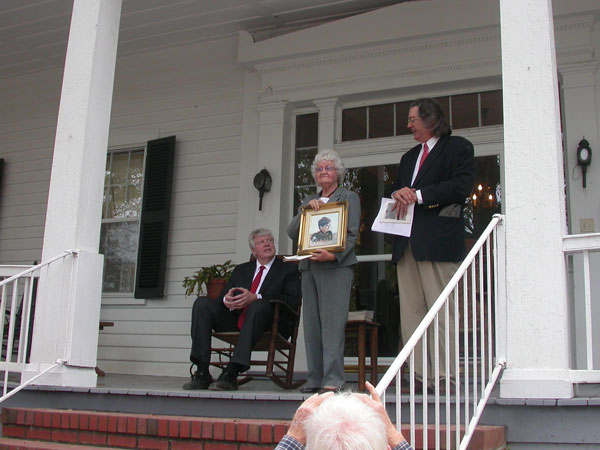 Confederate Re-enactors were on parade at the Edgefield County Historical Society meeting at the Greek Revival home called Darby Plantation in Trenton, on Sunday afternoon. A balmy breeze was encouraging for the outdoor affair, as attendees sat in chairs that encircled the front steps leading to the wraparound porch which acted as a stage. Clarice Wise owns the home and was hostess for the afternoon,

From the porch, president of the Society, Billy Benton, led the audience in singing “The Spirit of Edgefield,’ and introduced the speaker, historian Bettis Rainsford.

The audience heard a brief history of the plantation drawn from a fuller history published in a booklet made available to every attendee.  Rainsford researched and wrote The Story of Darby and it was published by the Edgefield Co. Historical Society.

The Society presented to Ms. Wise a gift for the home, a framed picture of one of the former owners of Darby, Susie Miller who was the aunt of her father, the late Douglas L. Wise.

The re-enactors presented the colors – the American, South Carolina, and Confederate flags – before giving a black powder salute followed by a cannon firing.

It was said that when the cannons went off in Charleston, at the start of the Civil War, that the report could be heard at Darby.  It was hoped that Charleston might hear the reverberations as the guns and cannon went off on Sunday.

Following the program, the crowd ventured down the driveway to Highway 25 where a marker was unveiled telling briefly the important history of this fine, historic house and plantation, which is still producing agriculturally under the auspices of its owner, Ms. Wise.

Probably the most entertaining part of the program were some of the anecdotes that Clarice shared from her growing up years at Darby, which included tree climbing, banister sliding, and riding of the animals – from pigs to mules.  She also remembered being able to take the train in front of her house to Edgefield, for 12 cents, to see the movies on Saturday.

As the crowds were finishing a “Southern Supper” provided by the hostess to the attendees, in her home, clouds formed outside to bring both hail and rain, a perfect ending for the plantation where drought has been the story for too long.

One Response to "A Cannon Fires: a Marker is Unveiled"