By Edgefield Advertiser on March 2, 2015Comments Off on Strom Thurmond High School Pass in Review 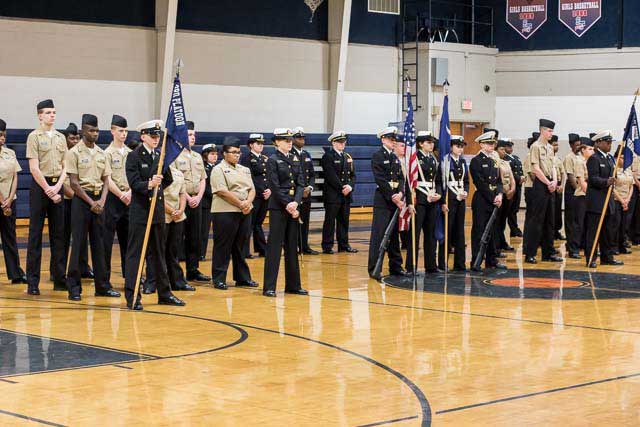 Presentation of the Colors followed with C/LT Ron Johnson, accompanied by The Strom Thurmond High School Band, singing The National Anthem. The invocation was delivered by C/ENS Hunter Reville.

Following remarks by members of the official party the unit was exercised and the drill team provided a demonstation.

The Strom Thurmond Concert Choir then sang God Bless America after which the unit conducted a flag passing ceremony and the pass-in-review.

“A ceremonial parade, impeccably performed, can never fail to be a source of inspiration to those who watch it or take part in it. It is the noblest and proudest form of drill. Based on the ‘blunt whetstone’ of drill instruction to recruits it was for many hundreds of years the foundation of battle discipline in all Armies . . .

“A Ceremonial parade, moreover, provides an occasion for men to express pride in their performance, pride in the Regiment or Corps and pride in the profession of Arms.”